What JP Nadda's elevation means for the BJP 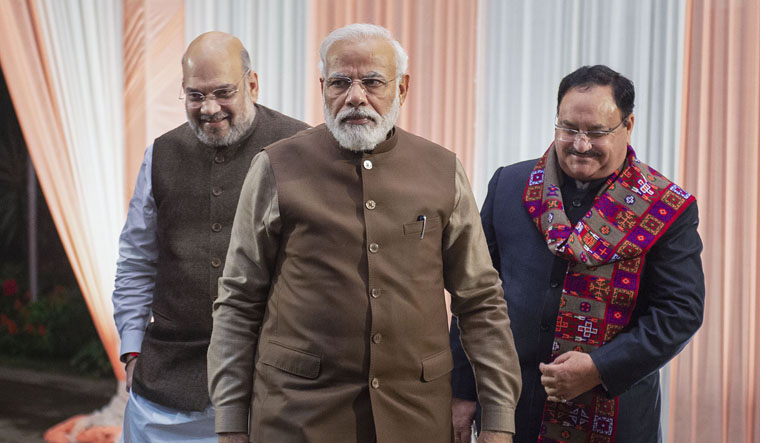 On Monday, immediately after his elevation as the BJP president succeeding Home Minister Amit Shah, J.P. Nadda chalked out his first target. "Today, we are the world's largest party that is in power in India. We have the highest number of MPs and MLAs in the country. We are not going to stop at this. There are some states left and we have set our aim there. We will make sure we reach to them as well," he said. Though he didn't mention the states, his remarks assume significance coming at a time the BJP is fighting against the AAP to wrest Delhi and working overtime to dethrone the Mamata Banerjee-led TMC from West Bengal. The Delhi and Bihar polls are set to take place this year; the West Bengal elections, later in 2021. The BJP has been out of power in the national capital for over two decades, and the party faces its most bitter rival in Banerjee in West Bengal. The implications are clear, as is its importance.

Nadda's elevation fits into BJP's need for immediate damage control. He takes over at a time when the BJP is witnessing vigorous challenge from a united opposition in assembly elections, amid signs that it needs to rejig its electoral strategy following a string of losses in state polls. More so, the Centre faced widespread anger from different states post the implementation of the Citizenship Amendment legislation.

In the context of BJP's political evolution, Nadda, at this point in time, seems a good fit. Soft-spoken, affable and low-key, Nadda is a quintessential organisation man who is expected to consolidate the rapid gains the party has made under Amit Shah. If Shah in 2014 was Prime Minister Narendra Modi's handpicked man to shake up the saffron organisation by easing out veterans, and infusing young blood to galvanise party cadres and fuel its expansion drive, Nadda is considered a seasoned hand who will build on these gains without causing too many disruptions.

And, Delhi, West Bengal and Bihar polls will be a litmus test for the party.

In Delhi, the BJP has been out of power since 1998. It suffered a humiliating defeat at the hands of AAP in 2015, and managed to win just three seats as opposed to AAP's 67. The party is fighting the polls with allies JD(U) and LJP. The BJP will allot two seats to the JD(U) and one to the Lok Janshakti Party. Shiromani Akali Dal (SAD), its partners in Punjab, opted out after disagreements over CAA. "During our meeting with the BJP, we were asked to reconsider our stand on CAA but we declined to do so. Shiromani Akali Dal is of the firm stand that Muslims cannot be left out of CAA,” SAD leader Manjinder Sirsa said. The BJP remains without a viable chief ministerial face in Delhi. The top BJP leadership has so far remained silent over the question, with names like senior Delhi BJP leader Manoj Tiwari, former Union minister Vijay Goel and leader of opposition Vijender Gupta doing the rounds.

In West Bengal, the BJP will be up against the party's most fiery opponent in Mamata Banerjee. And, CAA will be a flashpoint. The West Bengal BJP leadership had hoped that that the new citizenship law would be its "political trump card" ahead of the 2021 assembly polls in the state. Hindu refugees are a deciding factor in nearly 80 assembly seats in the state, whereas Muslims constitute a sizeable chunk of voters in around 90 constituencies. Apart from this, Hindu refugees are also spread in around 40-50 other seats, comprising between 10 and 15 per cent of the electorate.

But, an aggressive campaign against the CAA by the Trinamool Congress, other opposition parties, civil society groups, students and Chief Minister Mamata Banerjee's
declaration not to implement the CAA in the state, has put the saffron party on the backfoot. Apart from launching state-wide campaign against the new legislation, Banerjee has participated in six protest marches and three rallies in various parts of the state. In contrast, the BJP has organised only one mega march in the city, led by Nadda, and rallies by the state president.

The BJP has since decided to launch a campaign blitzkrieg. A blueprint of Bengal-specific programmes and campaigns has been prepared to to reach out to the masses and allay fears and misinformation campaign about the CAA. According to state BJP leaders, the CAA will determine the course of West Bengal politics in the days to come with the state bracing for a deeper polarisation between the TMC and the BJP on communal lines ahead of the 2021 assembly polls.

PM Modi has already sounded the poll bugle for West Bengal, with his visit to Ramakrishna Mission's Belur Math—which has wide acceptance among Hindus, especially Hindu refugees in east and northeast India—and his statement about CAA from the ashram premises.

The NDA alliance headed by JD(U)'s Nitish Kumar is in power in Bihar. It will be vital for the BJP to retain the state, amid the tug of war that has been going on between the alliance partners despite repeated assurances by Shah that elections in the state will be held "under the leadership of Nitish Kumar". Recently, the pot was stirred by JD(U) national vice-president Prashant Kishor, who held that his party must contest a number of seats that was higher than, and not equal to those fought by the BJP unlike in the Lok Sabha polls last year wherein both parties fielded candidates in 17 constituencies each. The BJP gave up five of its sitting seats to accommodate the JD(U) which had returned to NDA in 2017—and while it won all the 17, the ally bagged all but one. JD(U), the second largest constituent of the NDA with 16 Lok Sabha members after the exit of Shiv Sena, joined hands with the saffron party again in mid-2017 after forming a government with the RJD and the Congress in the state in 2015.

Then there are fissures over CAA and NRC. Prashant Kishor has come out vocally against both the legislations. CM Nitish Kumar announced that the National Register of Citizens (NRC) would not be implemented in Bihar. He also said that there should be a debate on the Citizenship (Amendment) Act in the Bihar assembly, if all parties agreed—a move which has displeased the saffron party to no end.

Nadda could possibly be the glue between the two parties. Nitish Kumar was one of the first to congratulate Nadda for his elevation. In his congratulatory message, Kumar said Nadda's election to the top post of the party was a matter of pride for Bihar since the BJP leader was born in Patna and had spent his childhood there.

Despite its overwhelming win in the 2019 Lok Sabha polls, the BJP has suffered several defeats in state polls since 2018 and its governments have been unable to come to power, except in Haryana where it had to join hands with JJP to form government. And, the party will look to Nadda to course correct. The 59-year-old Nadda, who holds a degree in law, brings decades of experience during which he served at key party posts, headed its election campaign in a host of states—from Bihar to Uttar Pradesh, Kerala, Maharashtra and Punjab among others—and also worked as a minister in BJP governments in his home state of Himachal Pradesh. He was also a Cabinet minister in the first Modi government.

He is considered within the party an epitome of political correctness with his manners unfailingly polite in public and his attacks on rivals never triggering any unseemly controversy. However, party insiders say Nadda can be very firm in his handling of organisational affairs and electoral challenges but makes it a point to not make any public fuss about them. He is also a man of detail as party leaders recall that he spent months in Uttar Pradesh, a state he was made incharge of during the 2019 Lok Sabha polls, meeting every religious leader of consequence and holding long meetings with party leaders and allies to take on the formidable challenge posed by the SP-BSP alliance. Nadda hails from Himachal Pradesh but was born and raised in Bihar where his father was a professor in Patna University.

He joined the ABVP, the RSS' student wing, there and was active in the anti-Emergency stir headed, his colleagues say. On his return to his home state, he was elected as student union president of the Himachal University. He became president of Bharatiya Janata Yuva Morcha, the BJP's youth wing, in 1991. Incidentally, Shah was also a BJYM office bearer that time.