FICCI study suggests setting up of ministry of blue economy

Blue economy is going to be an important concept this decade 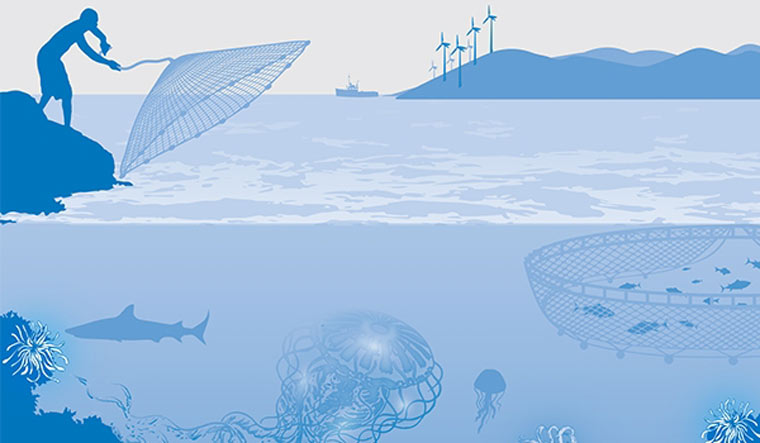 Union minister V. Muraleedharan says that India has endorsed the growth of a blue economy as a critical aspect of the development agenda | Image source: thecommonwealth.org

The sea was where life began—that primordial soup from which the first one-celled organisms took birth. It is back to the seas that the world is now looking to for solutions—whether it is stabilising the climate, trawling the sea bed for minerals, fishing its waters for food or trying to harness the power of the oceans to generate clean, renewable energy.

Blue economy, therefore, is going to be an important concept this decade. The blue economy concept was first articulated by the Small Island Developing States (SIDS) in 2012, with an approach to transform traditional ocean economy into an ecosystem driven harnessing of oceanic resources. While the concept is still evolving internationally, with varying stakeholders adopting various definitions, India has already reoriented itself, and is looking southwards to develop its blue economy. A study by a group of experts commissioned by the Federation of Indian Chambers of Commerce and Industry (FICCI) and released by V. Muraleedharan, minister of state for external affairs, has even suggested that the government consider setting up a ministry of blue economy that puts all components of a blue economy such as strategy, security, energy needs, transportation, fisheries and sea beg exploration under one umbrella.

Muraleedharan said that India endorsed the growth of a blue economy as a critical aspect of the development agenda with Prime Minister Narendra Modi's articulation of the SAGAR (Security and Growth for All in the Region) concept. Modi had even said that the blue wheel in the national tricolour stands for India's blue economy, the minister noted. He said that India had proposed the Indo Pacific Oceans Initiative to make partnerships for maritime security, resource exploration, capacity building and managing trade and transport. India's blue economy approach is based on the three pillars of security, sustainability and prosperity.

The Modi government has made various approaches to tap the nation's waterways, both inland, and marine, in a consolidated matter. Sagarmala, which was launched in 2015, is an approach to develop inland waterways and create a port-centered development and coastal community developments. India has 7,500 km of coastline. The Deep Ocean Mission, on the other hand, aims to explore the 75,000 sq km sea bed that comes under India's purview.

Among the other suggestions that the FICCI report makes are to create a blue economy atlas of the country as a business tool, create blue ad green bonds, develop marine tourism infrastructure, adopt measures to reduce marine litter and create a blue economy policy unit under the MEA for dialogues and cooperation with other like minded nations.