"Products made in India, carrying the fragrance of sweat of our countrymen" 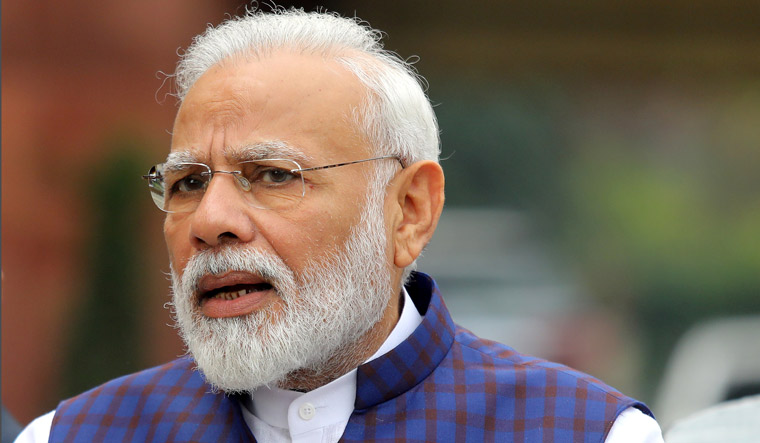 Prime Minister Narendra Modi on Sunday called upon people to promote indigenous products for the next three years till the completion of India's 75th year of Independence.

In his last 'Mann Ki Baat' programme for 2019 aired on All India Radio, Modi called for promoting swadeshi products and exhorted people to motivate others too in buying local products.

"My dear countrymen, can we pledge, that by 2022, when we achieve 75 years of Independence we insist and remain steadfast at least, for about two-three years on buying local products?

"Products made in India, made by the hands of our citizens, carrying the fragrance of the sweat of our countrymen, can't we resolve to buy such things? I do not advocate this for a long time, just till 2022, till the completion of 75 years of Independence," he said in his address.

Modi said this work should not just be carried on by government, but young people should step forward across the country in forming small organizations, motivating people, explaining and deciding  Come, we will buy only local, products, emphasize on local products, carrying the fragrance of the sweat of our countrymen - That will be the exultant moment of my free India; let these be the dreams with which we proceed."

He cited Mahatma Gandhi, saying he viewed this spirit of Swadeshi as a lamp illuminating the lives of millions as well as bringing prosperity in the lives of the poorest of the poor.

He said Gandhiji started a huge public movement to promote Indian products as one of its objectives a hundred years ago.

"This was the path shown by Gandhi ji towards self reliance. The India that we breathe freely in was liberated by millions of worthy sons and daughters who underwent numerous tortures and hardships; many even sacrificing their lives. We attained freedom owing to sacrifice and penance of innumerable people; a freedom that we are fully enjoying," he said.

The prime minister said one hardly knows the names of those countless beings who made the supreme sacrifice for the country, who went through untold hardships for the country.

"Of some we know; others will always stay anonymous. They all made sacrifices, firmly carrying that dream in their hearts.that of a free Indiafor the sake of a prosperous, flourishing and free India," he said.

Modi said he had made an appeal for promoting local products in his Independence Day speech and reiterated that today requesting countrymen to buy local produce preferably.

"Today once again I suggest, can we promote locally made products? Can we prioritize them in our shopping? Can we link local products with our status and pride? Can we become a medium to bring prosperity to our fellow countrymen with this spirit," he asked.

He lauded the local police and their families in Phulpur in Uttar Pradesh for promoting a local slipper manufacturing unit by local women.

He said due to the resolve of these women, not only the financial condition of their families have been fortified; their standard of living has also improved.

Exhorting countrymen to become self-reliant and live their lives with dignity, he also cited the example of one such initiative - Himayat Programme' of Jammu-Kashmir and Ladakh.

"The 'Himayat Programme' is actually associated with skill development and employment. In this programme, teenagers and youth from 15 to 35 years of age, those denizens of Jammu and Kashmir whose studies, for some reason, could not be completed, who had to leave school and college midstream are associated," he said.

Under the aegis of this programme in the last two years, the prime minister said 18,000 youth have been trained in seventy-seven different trades.

Out of these, around five thousand people are working somewhere or the other, and many have moved towards self-employment. The success stories of lives which have changed under the aegis of the 'Himayat Programme', truly touch the heart, he said.