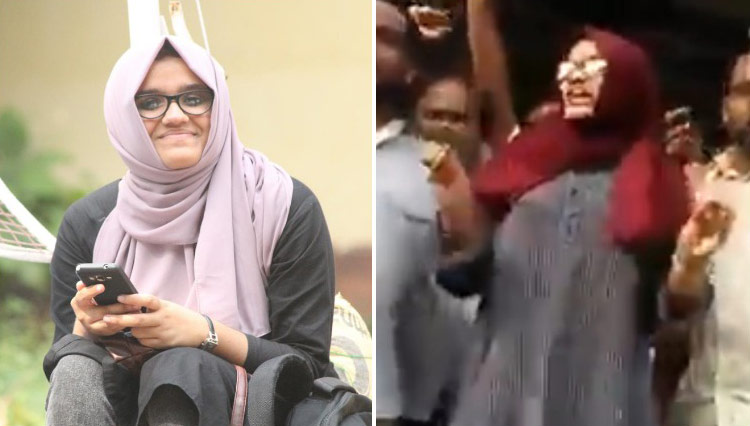 Aysha Renna; (right) Renna at the protest meet in Kerala

Aysha Renna, the student of Jamia Millia Islamia who became the face of anti-CAA protests for confronting the cops who were beating up her friend, was heckled at a protest meet in Malappuram, Kerala, for criticising the Pinarayi Vijayan government.

The 22-year-old History student, while speaking at a protest meet in her hometown Kondotty against the Citizenship (Amendment) Act, 2019, first called for the release of Bhim Army chief Chandrashekhar Azad who has been detained in New Delhi for anti-CAA protests.

She then went on to demand the release of the protesters who were detained by the Kerala Police during the statewide hartal against the CAA, on December 17. The hartal was called by Welfare Party, Social Democratic Party of India (SDPI) and Dalit Human Rights Movement (DHRM), among others. The CPI(M), Congress and the Indian Union Muslim League had distanced themselves from the hartal, because of the involvement of SDPI, which is known to have extremist links.

“We view all those who try to suppress us as people with the BJP. What we are going to witness is an emergence of Bahujan Muslim politics. I demand the release of Chandrashekhar Azad. I oppose the police action of arresting Chandrashekhar Azad. I also demand the release of those who protested in solidarity with the students of Jamia Milla and were arrested by the Pinarayi government. We will go ahead with our agitation” Renna said in her speech.

The reference to Chief Minister Pinarayi Vijayan, reportedly, irked the audience, some of whom demanded an apology. Though Renna tried to placate them by saying it was her “personal opinion” and that there should be no “internal conflict” among the anti-CAA protesters, the members of the audience, believed to be DYFI activists, continued to heckle her and shouted slogans against Renna and demanded her apology. She was later escorted away from the stage.

During the anti-CAA protests in New Delhi earlier this month, Renna and Ladeeda Farzana, a BA Arabic student at Jamia, were caught on camera shielding their friend Shaheen from the police and confronting them. The video, along with the pictures of her standing on a wall along with two other students, shouting slogans, had gone viral, making her the poster girl of the protests at the Jamia Millia Islamia against the CAA.