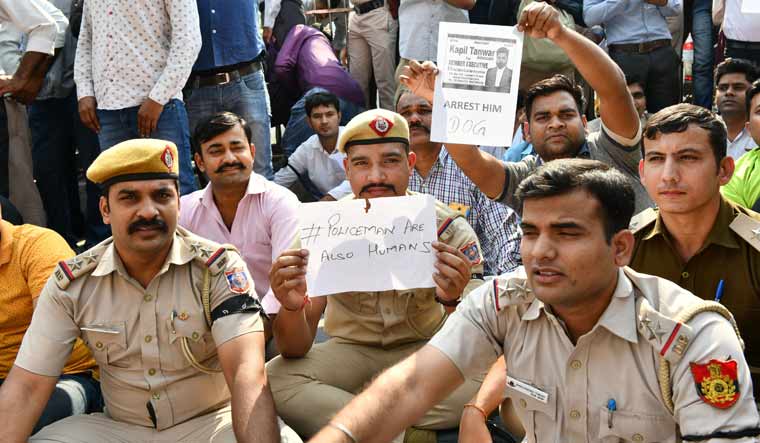 The Union ministry of home affairs on Tuesday received a report from the Delhi Police on the clash between lawyers and police at the Tis Hazari court complex on November 2 in which at least 20 security personnel and several advocates were injured, officials said.

It is a factual report in which the Delhi Police has given details of the circumstances leading to Saturday's incident and the action taken after it, a ministry of home affairs official said.

It does not cover what happened after Saturday—including an incident on Monday in which a a group of lawyers assaulted a policeman outside the Saket court—he said.

Following the incidents, hundreds of police personnel gathered in protest outside the police headquarters on Tuesday.

Holding placards that read "We are human in police uniforms" and "protectors need protection", the protesting police personnel gathered outside the police headquarters at ITO and urged their seniors to stand with them to save the honour of the uniform.

Delhi Police Commissioner Amulya Patnaik urged the protesting police personnel to return to work and said they should behave like a "disciplined force".

"The government and the people expect us to uphold the law—it is our big responsibility. I urge you to resume duty," Patnaik told the police personnel, adding that their concerns will be addressed.

Congress chief spokesperson Randeep Singh Surjewala asked whether this is the BJP's 'New India' and wondered where the ruling party is taking the country to.

"A new low in 72 years - Police on protest in 'National Capital of Delhi'. Is this BJP's 'New India'? Where will BJP take the country? Where is India's HM, Sh. Amit Shah," he posted on Twitter.

The party's spokesman RPN Singh said, "This is unprecedented. If law enforcement agencies are on the streets, what will happen to the common man?" He alleged that such things take place whenever the BJP is in power.