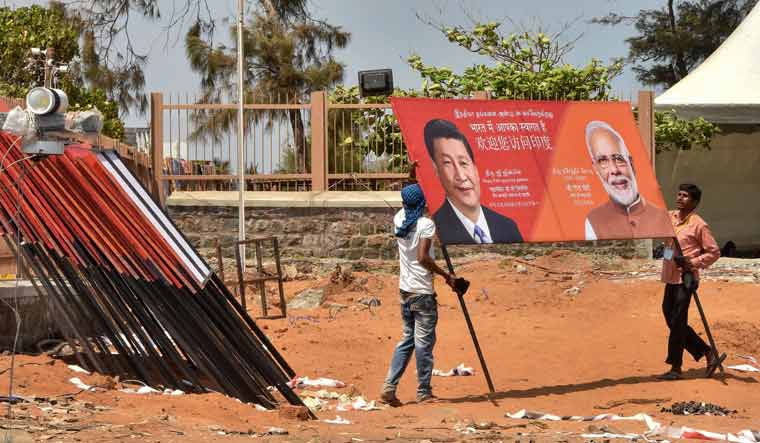 Workers carry a hoarding for installation as preparations are underway for the second informal summit between Prime Minister Narendra Modi and Chinese President Xi Jinping in the seaside temple town of Mamallapuram, Wednesday, Oct. 9, 2019 | PTI

Ahead of Chinese President Xi Jinping’s upcoming visit to India from Friday, a frontal organisation of the Sangh Parivar has expressed concern over a proposed free trade agreement, warning that it would adversely impact local industry.

Jinping's visit to India starting Friday will centre around an economic agenda, among other strategic issues. India is under pressure to be a signatory to a free trade agreement under the proposed Regional Comprehensive Economic Partnership (RCEP), for which ministerial level of member countries talks are to be held simultaneously in Bangkok.

Under the RCEP with other 15 countries, India may have to reduce import duty to zero on 80 to 95 percent of goods. The countries will include Australia, Brunei, Cambodia, China, Indonesia, Japan, Laos, Malaysia, Myanmar, New Zealand, Philippines, Singapore, Thailand, Vietnam, South Korea and India, making the RCEP the largest economic bloc in the world.

The Swadeshi Jagran Manch, a frontal organisation of the Rashtriya Swayamsevak Sangh (RSS) warned that it will adversely impact local industry.

“If this agreement is reached, it will have adverse far-reaching effects on India's manufacturing, agriculture and dairy. ‘Make-in-India' initiative which has been running under your inspiration for a long time, will come to a complete halt,” the outfit warned in a memorandum submitted to Prime Minister Narendra Modi.

“Most of our industries have either shut down or are on the verge of closure, due to the dumping of cheap Chinese goods for a long time. In such a case, the commitment of zero import duty on 80 per cent of Chinese products in RCEP is beyond comprehension,” the statement added.

The RSS body warned that it will be forced to launch an agitation if the government becomes a signatory to the agreement.

Modi had taken stock of local concerns, as is Home Minister Amit Shah, who also engaged with ministerial colleagues on the concerns. The BJP has seperately heard the views of various stakeholders at its party headquarters, as the decision on RCEP will directly impact its core votebank of traders and businessmen.

The Swadeshi Jagran Manch said, “Due to imports of milk and milk products from New Zealand and Australia at zero import duty, there will be a huge fall in the procurement price of milk to our farmers, which will lead to a huge decline in employment in rural areas, especially women. The income of the farmers will be halved rather than doubled and the employment of at least five crore people will be lost.” The organisation added that India’s position as the world’s largest producer of milk, with a production of 150 million tonnes, would be lost, forcing the country to grow dependent on other nations for milk.

Though there are concerns by the RSS bodies over the trade agreements, RSS chief Mohan Bhagwat in his Vijay Dashmi speech appeared to present a nuanced position, in wake of the economic slowdown, on economic issues like the FDI and disinvestment—which it had strongly opposed in the past.