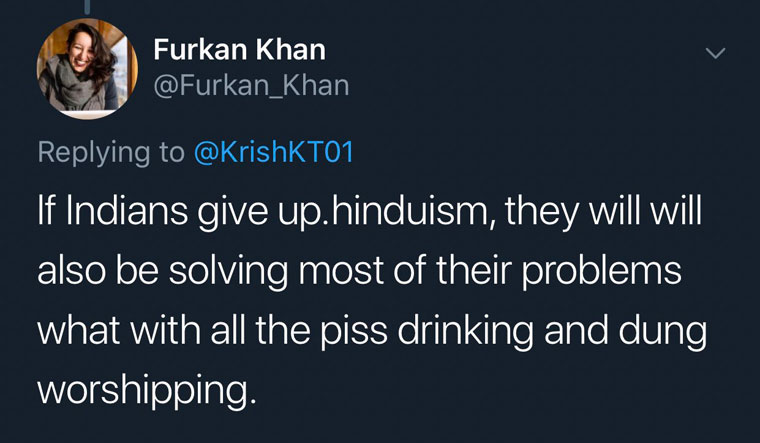 An employee of the US National Public Radio (NPR) in Delhi resigned after a tweet by her on Hinduism on September 9 triggered outrage.

Furkan Khan, who was a producer with NPR, had tweeted "If Indians give up on Hinduism, they will also be solving most of their problems. What with all the piss drinking and dung worshipping."

I wholeheartedly apologize for my tweet earlier. It was ill considered & unacceptable. I deleted it. I didn't mean to disparage Hinduism or hurt anyone's feelings. It doesn't reflect my beliefs and principles. Please accept my sincere regret. I'll be off Twitter for a while.

The tweet invited widespread criticism, including by pro-rightwing handles and even Muslims. Furkan Khan tweeted on Tuesday that she had deleted the offensive statements, “so that I am not misrepresented”. A day later, Furkan Khan apologised for the tweet on Hinduism, tweeting, “It was ill considered & unacceptable. I deleted it. I didn't mean to disparage Hinduism or hurt anyone's feelings. It doesn't reflect my beliefs and principles...” Furkan Khan had been engaged in jousts on Twitter with rightwing handles on the current situation in Jammu and Kashmir.

On Wednesday, the Legal Rights Observatory, a legal group considered close to the RSS, announced it had lodged a complaint with the Delhi Police against the tweet by Furkan Khan. The Legal Rights Observatory termed Furkan Khan's statement as an “open call to Hindus to convert and derogatory tweet.” It also called on the Delhi Police to seek an official clarification from NPR. Furkan Khan also deleted a reference to NPR in her Twitter bio.

NPR is a non-profit media group that was founded by an act of the US Congress in 1967. It claims to reach as many as 105 million people monthly across platforms including radio, website and social media.

Furkan's resignation from NPR comes days after Indian Ambassador to the US Harsh Vardhan Shringla complained that sections of the US media were showing a “one-sided” perspective of Kashmir. In an interview to PTI, Shringla claimed the liberal media was showing a perspective pushed by those inimical to India's interests.