OPINION: India edges closer to its own 'French Revolution' 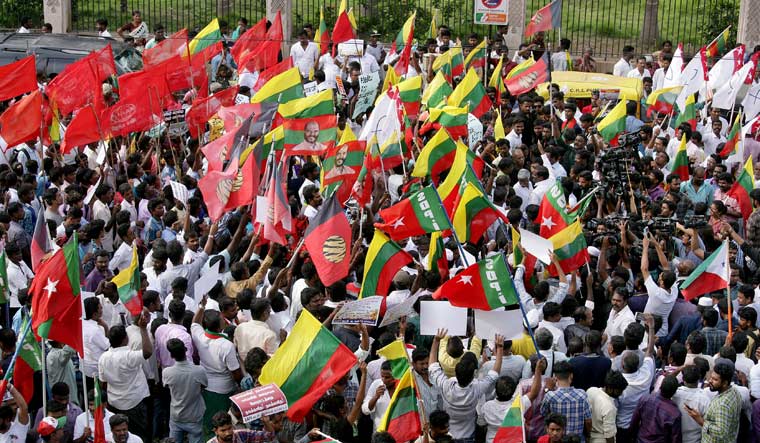 (File) Representational image of a protest in Tamil Nadu | Reuters

The Indian people remind me of Mir Saheb and Mirza Saheb in Munshi Premchand's story Shatranj ke Khilaadi. Mir and Mirza were so engrossed in playing chess in Lucknow that they were oblivious to all that was going on around them, until the British army was at their doorstep.

I have been saying since long that some kind of event similar to the French Revolution was coming in India, but I was mocked at, not taken seriously, and depicted as the boy who cried 'wolf'. Well, the wolf is staring you at your doorstep now, and you cannot keep avoiding its glare and behaving like an ostrich anymore.

Consider the facts. On the one hand, all state institutions in India have become hollow and empty shells and largely corrupt (See my article Why celebrate Republic Day when Constitution has become a scarecrow?). On the other hand, the Indian economy has tanked, and is spirally rapidly downwards (Details about fall in GDP, auto sales, IT sector; steep manufacturing decline; crash in the real estate market; lakhs of job losses etc., are available everywhere in the media, so I am not repeating them).

The abolition of Articles 35A and 370 of the Indian Constitution (which gave a special status to Jammu and Kashmir) was to my mind only a stunt and a gimmick, much like Yoga Day, Swachh Bharat Abhiyan, campaign for a Ram Mandir, gau raksha, ghar wapsi and others to divert people's attention from the looming economic crisis. But one cannot keep bluffing with hard economic facts forever.

What in essence is the cause of this crisis? All economists admit it is due to lack in demand, and this is because most people in India are poor and have little purchasing power. We no doubt can increase production easily as we have thousands of engineers and technicians (our IT engineers are largely manning Silicon Valley in California, and Indian professors can be found in dozens of science, engineering, and maths departments of US universities) as well as immense natural resources.

But how can the increased production be sold when most people are too poor to buy? So the solution to the problem is to raise the purchasing power of the masses, but that cannot be done within the present system.

In the Soviet Union, the policy of rapid industrialisation came with the adoption of the first Five-Year Plan in 1928. The methodology adopted was this: the government fixed prices of commodities and kept reducing them by 5-10 per cent every two years or so. This enabled people to buy more goods with the same wage (as real wage is relative to the price index), and this led to steady expansion of the domestic market.

Simultaneously, production was rapidly stepped up, and this increased production could be sold in the domestic market as people now had more purchasing power. Also, this rapid industrialisation created millions of jobs, which solved the problem of unemployment. Thus the Soviet economy rapidly expanded at a time when the Great Depression, starting from the Wall Street crash of 1929, was going on in the US and Europe, resulting in closing down of thousands of factories, which threw out millions of workers from their jobs.

In my opinion, the same methodology alone can solve India's economic crisis, but that will not be accepted in the system prevalent in India today. So, the situation will keep getting worse.

We have the parliamentary system of democracy in India, but everyone knows it runs largely on the basis of caste and religious vote banks. Casteism and communalism are feudal forces, which have to be destroyed if India is to progress, but parliamentary democracy further entrenches them. So it has to be replaced by an alternative system, which enables India to rapidly industrialise, since rapid industrialisation alone is the solution to our country's problems, as it will generate the wealth required for providing for the welfare of our people and creating millions of jobs.

The last Lok Sabha election in India was won on the plank of Hindutva (and Pakistan bashing). But one can't eat Hindutva—one must eat food, and to eat food, one must have a job. But joblessness is at a 45-year high, as even the National Sample Survey (a Government of India organisation) admits, and the situation is getting worse.

The pace of history has speeded up in India. Those who were heroes only a few weeks back are rapidly becoming zeroes, and may soon become villains in the eyes of the public, as people wake up to harsh economic realities.

Presently, people in India are in a state of shock due to the steep and sudden economic downturn, but they will not remain in this state long. Approximately 12 million youth are entering the job market in India every year, but jobs are getting less. Farmer distress continues unabated (over 300,000 farmers in India have committed suicide), and every second Indian child is malnourished (according to the Global Hunger Index, UNICEF, etc.,). This is bound to result in large-scale popular agitations soon.

Mergers of banks, selling off Air India and other public sector undertakings; taking huge amount of money from the Reserve Bank of India to finance the deficit and other moves are all desperate measures, but they cannot solve anything. A total historical transformation of the present political and social system is required, and now it can be seen appearing on the horizon, though no doubt it will be achieved only after a long popular struggle led by patriotic modern-minded leaders, and tremendous turbulence, sacrifices and pain.