What fate awaits those rendered 'stateless' by the NRC?

How long does the Centre intend to drag out the process? 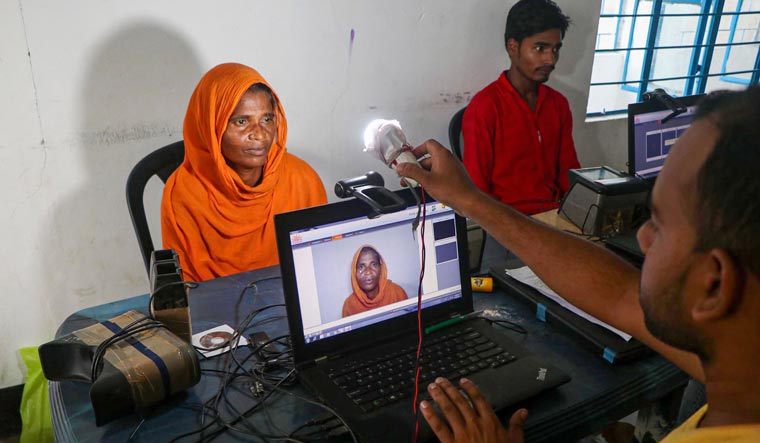 After the final list of the Assam National Register of Citizens (NRC) was published, excluding 19 lakh names, northeast BJP leader Himanta Biswa Sharma said the Centre would approach "friend" Bangladesh to take back its people, reported News18. “Bangladesh is India's friend. They take back their people when we have presented cases of illegal immigration. The number has not been high, but now we will have a process to identify them,” he said, according to the report. But, the problem: Bangladesh Home Minister Asaduzzaman Khan said the country had nothing to do with the NRC, was not approached by the Indian government, and was not aware of cases where illegal migration has happened after 1971. This, in a nutshell, sums up the NRC process. A state is on sword's edge, divided along all ethnic and communal lines possible, but there seems to be no end game in sight.

By the end of the process, the NRC—in its present form—had become an almost universally hated exercise, eliciting anger from political parties of all hues. The opposition on Saturday expressed concern over the exclusion of over 19 lakh people from the NRC in Assam and said steps should be taken to ensure that no Indian citizen is left out, while the state BJP said it does not trust the updated list and a legislation will be brought to safeguard the interest of genuine applicants. The Congress said it stands by those excluded and will provide them legal aid.

Partly the result of the tight glare of the international community (see the statement of the UN High Commissioner for Refugees Filippo Grand), is the Centre backtracking from the whole process? How long will the process be dragged out? On Sunday, the government assured that the people left out of the National Register of Citizens (NRC) for Assam are not "stateless" and will continue to enjoy all the rights as before till they exhaust all remedies available under the law, the Ministry of External Affairs (MEA) said on Sunday. It said exclusion from the NRC has no implication on the rights of an individual resident in Assam and that they will not be deprived of any rights or entitlements which they have enjoyed before.

The ministry's comments came in the wake of commentaries in sections of the foreign media about certain aspects of the final NRC which it said are "incorrect". MEA spokesperson Raveesh Kumar said the NRC is a court-mandated and-monitored exercise, and not an "executive driven" process.  He said the NRC would give effect to the Assam Accord of 1985 which promised to take care of citizens of the state.

The NRC has been prepared to identify genuine Indian citizens living in Assam since March 24, 1971, or before, and identify illegal Bangladeshi migrants in the state. Out of 3.3 crore applicants, over 19 lakh people were excluded from the final NRC published on Saturday. "Exclusion from the NRC has no implication on the rights of an individual resident in Assam. For those who are not in the final list will not be detained and will continue to enjoy all the rights as before till they have exhausted all the remedies available under the law," the MEA spokesperson said.

"It does not make the excluded person 'stateless'. It also does not make him or her a 'foreigner', within the legal meaning of the term. They will not be deprived of any rights or entitlements which they have enjoyed before," Kumar added.

Kumar said that anyone excluded from the list at this stage has a right to file an appeal within 120 days of receiving a notification of exclusion in the designated tribunal. "All appeals and excluded cases will be examined by this tribunal i.e. a judicial process. This judicial process will commence only after the appellate period is over. Thereafter, anyone still aggrieved by any decision of being excluded will have the right to approach the High Court of Assam and then the Supreme Court," he stated. He also said that the Indian government will even assist in providing directions on how to deal with such appeals.

"Through the District Legal Service Authorities, the government has provisioned to extend legal aid to the needy. The state of Assam has assured provision of free legal assistance to any person excluded from the list and who is unable to afford such legal assistance. This is to enable people, especially the disadvantaged sections, to have access to the best possible legal assistance," the spokesperson said.

He said that the updating of the NRC is a "statutory, transparent, legal process" mandated by the Supreme Court.

"This is not an executive-driven process. The process is being monitored by the Supreme Court directly and the government is acting in accordance with the directives issued by the court. The apex court of the land has itself set the deadlines for all steps that have been taken so far," he said.

Kumar said that the NRC is a fair process based on scientific methods. "Inclusion in the NRC is a unique process, as it is based on 'application' rather than 'house to house enumeration'. It means that any person in Assam could have sought to be included in the list on the basis of having documentation to prove lineage from an entitled person, i.e. a person who was a resident of Assam as on March 24, 1971," he explained.

He also stated that it is a non-discriminatory process, which leaves no room for bias and injustice. "As can be seen from the application form for data entry in NRC, there was no column in the application asking for the religion of the applicant," Kumar said.

He said, "India, as the world's largest democracy, has firmly enshrined 'equal rights for all' and 'respect for the rule of law' in its Constitution."  "An independent judiciary and fully autonomous state institutions, working for the defence of human rights, are an integral part of our political fabric and traditions. Any decision that is taken during the process of implementation of the NRC, will be within the four corners of the Indian law and consistent with India's democratic traditions," the spokesperson said.

Referring to the NRC, Pakistan PM Imran Khan on Saturday said the Modi goverment's "ethnic cleansing of Muslims should send alarm bells ringing across the world". An apex body of 21 indigenous Muslim organisations in Assam on Sunday slammed Pakistan Prime Minister Imran Khan for his comments on NRC saying he has no locus standi on the issue and they have been living in the state peacefully for generations.