In the past few days, two Sikh girls have been forcibly converted to Islam 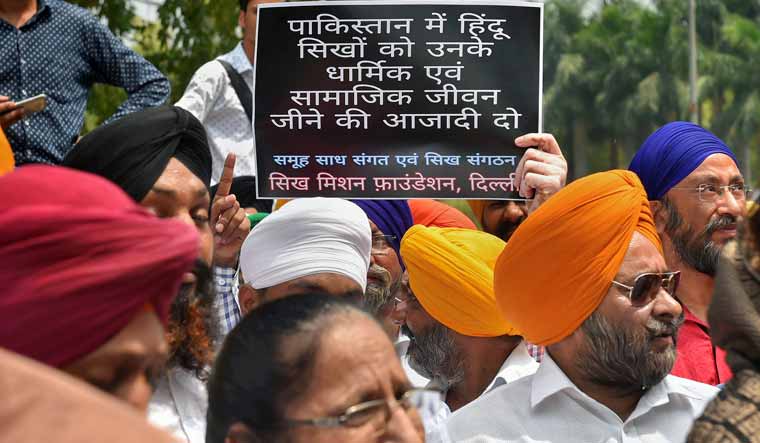 Members of Sikh community display a placard during a protest against alleged forceful conversion of minorities in Pakistan, near Pakistan High Commission in New Delhi | PTI

On August 31, a Pakistani Sikh girl was allegedly abducted and forcefully converted to Islam. She was also married to a Muslim man in Nankana Sahib of Punjab province of Pakistan. Although the girl's family allege that she was married off to a Muslim boy at gunpoint, the girl said yesterday that she adopted Islam and Mohammad Hassan out of her own will.

Sikhs in Delhi are staging a mass protest for the 19-year-old, Jagjit Kaur. The group burnt effigies of Imran Khan and have made it vocal that they are enraged over the forced conversion of Sikh girls in Pakistan. Members of the Sikh community have been wanting to submit a memorandum at the Pakistan High Commission but were stopped. They are now staging a protest outside the Pakistan Embassy.

In the past few days, two Sikh girls have been forcibly converted to Islam. Fearing threat to her life, the girl who is now called Ayesha refuses to go home, said a Pakistani official. An FIR was registered against six people in the case and one has been arrested. According to the official, the governor even told her that "her marrying a man outside her religion is becoming a religious matter and there has been tension in Nankana Sahib among Sikhs and Muslims.” But the girl stuck to her decision. Pakistan's Punjab province on August 31constituted a high-level committee to negotiate with Sikhs who are angry over the issue.

Yesterday, activists of Bajrang Dal in Punjab, came out to protest the forced conversion of Kaur and burned an effigy of Imran Khan. All India Sikh Students Federation, in an open letter to PM Imran Khan, asked for clarifications on the steps taken up by the Pakistani government to resolve the issue.