Andhra secretariat to be moved as prelude to a big decision on capital?

The state secretariat is likely to be shifted to Nagarjuna University 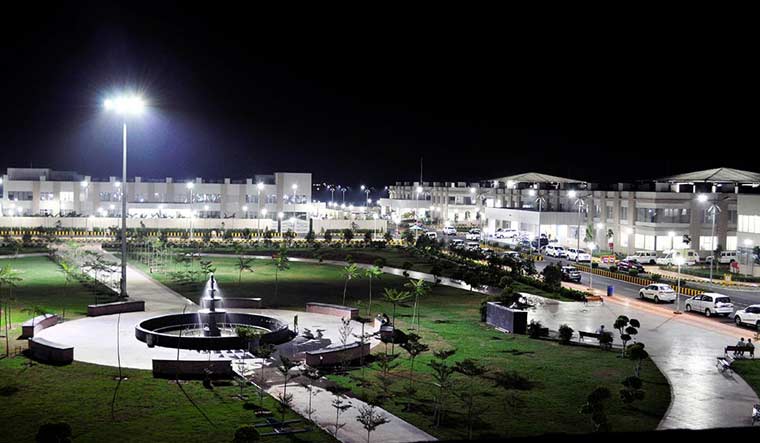 The Andhra Pradesh secretariat, housed in temporary structures in Velagapudi in Amaravathi capital region, might be shifted to a new location. The seat of administration was moved closer to Vijaywada from Hyderabad, the common capital of Andhra Pradesh and Telangana, in 2016. Since then, close to 2,500 state government employees have been working in the new complex.

The then Chandrababu Naidu government had constructed the secretariat complex on a 45-acre land in Velagapudi village at a cost of more than Rs 200 crore. In the initial days, the opposition parties alleged that the quality of construction was poor resulting in leakages and flooding. Since the complex was located in the interiors, some of the employees had also expressed their displeasure. The complex is almost around 40 km from Guntur and 25 km from Vijaywada.

Now, a section of employees is requesting the new government, helmed by the YSR Congress Party (YSRCP), to shift their offices.

“The present secretariat is causing great inconvenience to the visitors as well as common public,” said K. Venkatrami Reddy, chairman, AP Government Employees Federation. “We want the secretariat to be on a highway or closer to a town. Since the surroundings of the secretariat are uninhabitable, people travel close to 100 km on a daily basis. In the last few years, 15 employees have died either due to accidents or health complications. We want a site which is easily accessible.”

According to sources in the AP government, the proposal is being considered seriously.

The secretariat is likely to be shifted to Nagarjuna University, one of the oldest universities in united AP. The university was established in 1976 in Guntur district. It is on the highway connecting Vijaywada to Guntur. It is learnt that some senior officials involved in the exercise are convinced about the property.

“Most of the secretariat employees who have moved without their families have been provided accommodation near the university by the previous government. If the secretariat is shifted to the university, it will be very convenient for the employees. The university has permanent buildings and not much needs to be spent on new infrastructure. Strategically, it is a good location since it is close to three major towns, Vijaywada, Guntur and Ongole,” said a senior official of AP government who did not wish to be named.

So, what are the other reasons that have made the ruling party even think of shifting the most important landmark in the Amaravathi capital region? To start with, the YSRCP government is firm on their stand that the complex is yet another project of the previous government executed blatantly in the flood-prone region of Krishna river. Apart from that, it is a temporary structure and the property does not hold much importance. Also, the new government believes that irregularities have been committed while implementing the project.

If the state secretariat is shifted, is it the sign of a bigger development? Will capital Amaravati be next in line? There has been a buzz in the state after Municipal Administration and Urban Development Minister Botsa Satyanarayana made some comments. A few days back, he said that Amaravathi is not fit to be the Andhra capital since it is prone to floods. He also cited Sivaramakrishnan Committee, which was constituted by the Centre to suggest a capital to the newly bifurcated state, and said that the Naidu government went against the recommendations of the committee and chose Amaravathi.

Chief Minister Y.S. Jaganmohan Reddy is currently on a foreign tour. Once he is back, it will become clear if the new government wants to shift the capital or make changes to the existing plan of the capital region.