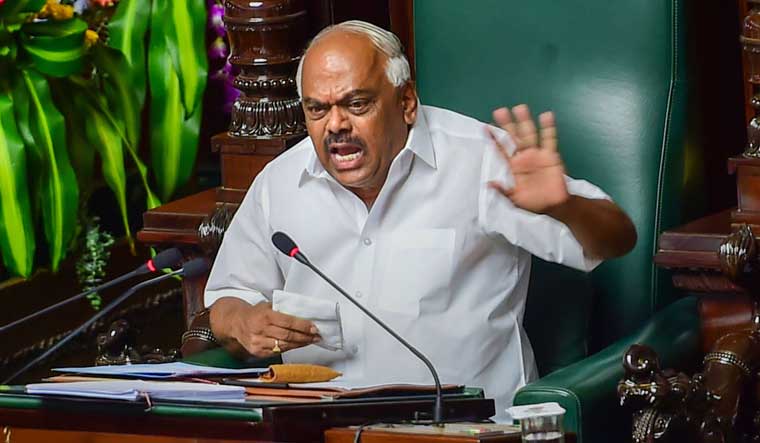 Speaker K.R. Ramesh Kumar said no MLA has sought protection from him amid allegations by the Congress that rebel lawmakers were being held captive to bring down the government. "No one has come seeking protection... nor have their families come.. so the issue ends there," Kumar said. The statement by the speaker in the assembly came after senior Congress leader H.K. Patil requested him to create an atmosphere conducive for the legislators who are holed up outside the city to attend the session.

Earlier, Karnataka Chief Minister H.D. Kumaraswamy had moved the Supreme Court saying that Governor Vajubhai Vala cannot dictate to the Assembly the manner in which the debate on the confidence motion has to be taken up.

The Chief Minister questioned the deadlines set by the Governor one after another to complete the trust vote, and also sought clarification on the apex court's July 17 order which said that the 15 rebel MLAs cannot be compelled to attend the proceedings of the House.

Kumaraswamy said in his plea that the Governor sent a communication on Thursday directing that the confidence motion and the trust vote should be held before 1:30 pm on Friday.

It said Karnataka Assembly Speaker K.R. Ramesh Kumar has also opined that the trust vote will take place only at the end of the debate.

"In these circumstances the Governor cannot dictate to the House the manner in which the debate of the confidence motion has to be taken up," the plea said.

Kumaraswamy said he had written to the Governor on Friday informing him that the House was already considering the confidence motion and the debates are currently going on.

He said the Governor has sent another communication that the trust vote should be held before 6 pm on Friday.

It contended that any interpretation of the July 17 order which "whittles down" the power of a political party to issue a whip to its legislators would be in the teeth of the provisions of the Tenth Schedule of the Constitution and the judgment of the constitution bench of the court.

Kumaraswamy said a political party under the Tenth Schedule has a constitutional right to issue a whip to its legislators.

"The exercise of this right under the Constitution is not circumscribed by any condition nor can it be subject to any restrictive orders even prior to the issuance of the whip. More importantly, any enquiry for the purposes of the Tenth Schedule is a proceeding of the Legislature of the State within the meaning of Article 212 of the Constitution," the plea said.