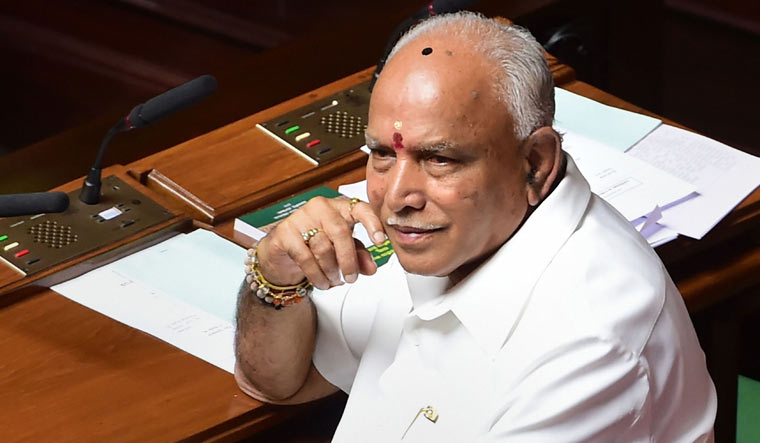 BJP leader B.S. Yeddyurappa in the Assembly on July 19 | PTI

The Karnataka Assembly on Friday saw legislators of the ruling Congress-JD(S) coalition make serious allegations against BJP leaders, accusing them of bribing MLAs to destabilise the coalition government.

During his submission on the trust vote, Chief Minister H.D. Kumaraswamy stated that the Anti-Defection Law was being weakened to engineer mass resignations. "A new chapter started in the state, with the JD(S) and Congress legislators being made to resign and reduce the majority,” he charged.

JD(S) MLA from Kolar Srinivas Gowda alleged that the BJP offered him Rs 5 crore. "BJP leaders Ashwathnarayan, C.P. Yogishwar and S.R. Vishwanath came to my house and offered Rs 5 crore to me to cross over. I refused to accept, but they left behind Rs 5 crore. Later, they offered Rs 30 crore. I want to ask them: Did people vote for us, so that we could be purchased with money?" asked Gowda.

The Congress legislators slammed the BJP leaders for trying to bribe and corrupt their members. The speaker, who intervened, said he would let everything go on the record. "You are killing respectable people with your corrupt games. You can choose to be dishonest and corrupt. I want to bare them all. Expose everything. I dare you to slap cases against people making the allegation,” said Ramesh Kumar.

“Just before the Lok Sabha polls, I asked Vishwanath if he wanted to become a minister. He denied it. But he told me he had taken loans for elections—BJP has offered him Rs 28 crore. But Deve Gowda offered me a ticket and I cannot go anywhere, he confided. He asked me to help him repay the loan. I promised to help. But when I went to America, I called him again. He told me he would speak later. He went to Mumbai. I want to know for how much he got sold," asked Mahesh.

Congress Minister Krishna Byre Gowda charged that the BJP leaders' silence even in the face of a serious allegation goes to show the horse-trading charges are true. "They are reluctant to move a privilege motion though they have been named in the House," he said.

Roopa Shashidhar, a first-time MLA and daughter of former Union minister K.H. Muniyappa, said, "We have worked hard to reach where we are today. For the fault of a handful of legislators, why should we all be made to hang our heads in shame? In my constituency, we are struggling to save our party. We demand an open discussion. It is denting our image as elected representatives. Party is like a mother and we should not betray it."