Asks HDK to complete floor test on Friday itself, after earlier deadline ends in vain 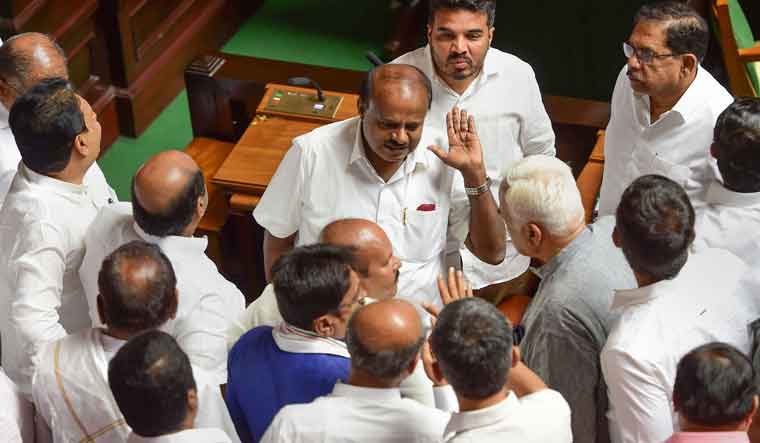 Karnataka Chief Minister H.D. Kumaraswamy discusses with his cabinet colleagues after assembly was adjourned for lunch at Vidhana Soudha in Bengaluru on Friday | PTI

Karnataka Governor Vajubhai Vala on Friday sent a letter to Chief Minister H.D. Kumaraswamy to prove his government's majority in the assembly before 6pm on Friday. Vala set the second deadline for the floor test, after the first deadline went in vain on Friday without the assembly taking up the voting on the motion of confidence to decide the fate of his shaky government.

"I have respect for the governor. But the second love letter from the governor has hurt me. He only came to know about horse trading 10 days ago?" Kumaraswamy asked, flashing photos of B.S. Yeddyurappa's personal staff Santosh reportedly boarding a plane with independent MLA H. Nagesh. "I leave the decision on the floor test to you (the speaker). It won't be directed by Delhi. I request you to protect me from the letter sent by the governor." A debate on the motion of confidence is currently underway at the Vidhana Soudha.

Meanwhile, the Karnataka Congress moved the Supreme Court on Friday contending that its July 17 order on the resignation of 15 rebel Congress-JD(S) MLAs was coming in the way of the party issuing whip to its legislators in the ongoing trust vote. The application filed by Karnataka Congress chief Dinesh Gundu Rao sought clarification on the order which said the 15 rebel MLAs cannot be compelled to participate in the ongoing assembly proceedings, saying that the direction compromises with the party's right to issue whip.

It said the apex court order "whittles down" the power of a political party to issue whip to its MLAs as it has a constitutional right to do so and the court can't restrict that.

Further, in the plea, it is stated that the order was passed without involving the Congress legislature party, which presently has 79 MLAs in the Karnataka assembly.

The Congress, while referring to a judgement delivered by a constitution bench of the apex court, submitted that any interpretation of the order of July 17 "which whittles down the power of a political party to issue a whip to its legislators would be in the teeth of the provisions of the Tenth Schedule of the Constitution". It sought a clarification that the direction passed on July 17 does not refer to the rights of a political party to proceed under the Tenth Schedule.