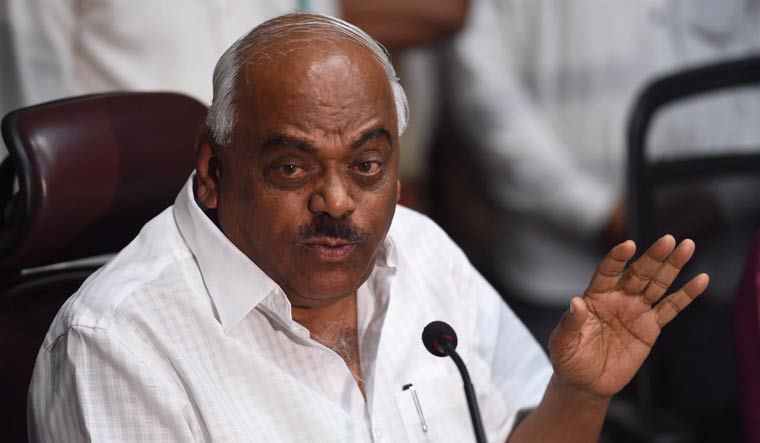 Nothwithstanding a Supreme Court order, Karnataka Assembly Speaker K.R. Ramesh Kumar on Thursday ruled out any immediate decision on the resignation of rebel MLAs in the crisis-hit ruling JD(S)-Congress coalition, saying he cannot be expected to work at "lightning speed".

As suspense mounted on the Speaker's course of action after 10 dissident MLAs appeared before him following the court order and submitted their resignations afresh for acceptance, Kumar said the letters were in the "right format" but he will have to examine whether they are "voluntary and genuine."

The 10 MLAs, who were flown in by two special flights to Bengaluru from Mumbai, took a luxury bus from the HAL airport in the heart of the city to the Vidhana Soudha, the state secretariat, amid tight security. Sources said the rebel MLAs will be returning to Mumbai where they were holed up in a luxury hotel for the past few days since the crisis erupted last Saturday.

After the Congress, the JD(S) said the party too has approached the Speaker seeking disqualification of three of its legislators.

The apex court earlier in the day asked the Speaker to decide "forthwith" about the resignation of 10 rebel MLAs, allowing them to meet him at 6 pm.

A Bench headed by Chief Justice Ranjan Gogoi said the decision taken by the Speaker has to be intimated on Friday when the court takes up the plea by the rebel MLAs.

The bench, comprising Justices Deepak Gupta and Aniruddha Bose, also directed the Karnataka DGP to provide protection to the 10 MLAs from Bengaluru airport to the Assembly after their arrival from Mumbai.

In the order passed, the bench, said: "Having regard to the facts of the case, we permit the petitioners (rebel MLAs), ten in number, to appear before the Speaker of the Karnataka Legislative Assembly at 6.00 pm today.

"We request the Speaker to grant an audience to the ten petitioners at the said time. The petitioners, if they so wish and are so inclined, shall intimate the Speaker of the Assembly their decision to resign, in which event, the Speaker shall take a decision forthwith and, in any case, in the course of the remaining part of the day."

It further said that "such decision of the Speaker as may be taken in terms of the present order, be laid before the Court tomorrow (Friday, July 12)".

Hours after the order was passed, the Speaker through his counsel, rushed to the apex court for modification of the direction asking him to decide the issue of the resignation in the course of the day.

However, the bench, which assembled after the lunch break told the Speaker's counsel Abhishek Manu Singhvi that the order has already been passed in the morning and his application will be taken up Friday along with the plea of the rebel MLAs.

Chief Minister H.D. Kumaraswamy rejected demands by the BJP for his resignation, as the state Cabinet met and resolved to face the situation "bravely" and "withstand" it unitedly.

"Why should I resign? What is the necessity for me to resign now?," Kumaraswamy shot back at reporters, amid speculation he could put in his papers in the wake of the crisis.

"The Supreme Court has not asked me to decide in any particular manner," he added.

"The MLAs had come, they said they want to resign, I said they can give...they asked me to accept it.

"It cannot be like that I will have to see whether it is genuine or voluntary and be convinced," Kumar told reporters after meeting the disgruntled legislators.

Kumar said "the proceedings of today have been videographed, and will be sent to the Supreme Court Registrar General.

"Court has asked me to come to a decision, I have written to them (SC) about the word "forthwith" they have said, I am unable to understand- what to decide, as Constitution says something else, so I have given them (MLAs) time (to appear before me).

Should I have worked at lightning speed? For whose sake? What about the rules, the people? I only live by the Constitution....I am not acting in haste. My obligation is to the people of this state and the Constitution," he said.

As per the Karnataka Legislature Rules, intended resignation should be "in perfect format," he said.

"Unfortunately, eight of the 13 letters that reached my office (last week) were not in the format," the speaker said. Suspended Congress MLA Roshan Bagi had also quit earlier this week.