Kamal Nath, Scindia lunch together in a show of unity 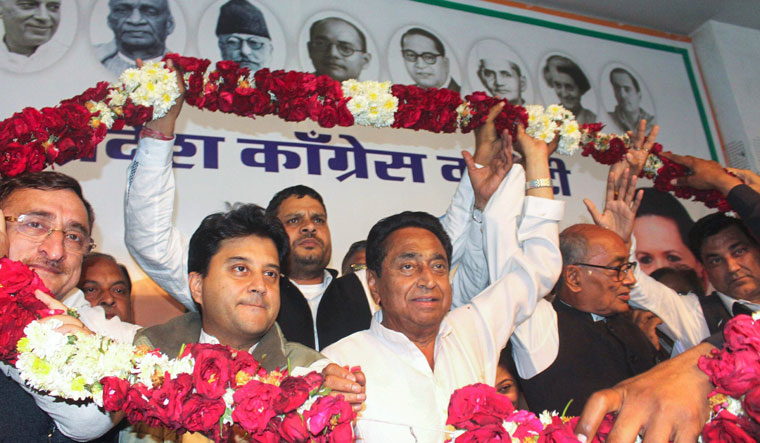 At a time when the Congress government is facing crisis in Karnataka and the Congress legislative party in Goa is in shambles, Madhya Pradesh Chief Minister Kamal Nath and former Union minister Jyotiraditya Scindia sought to sent out a strong message of unity from Bhopal by bonding over food.

Scindia, who was in Bhopal on Thursday, had lunch with the chief minister at the latter’s official residence. Both are also slated to have dinner together at minister Tulsiram Silwat’s house on Thursday night.

Apart from these two big leaders, ex-chief minister Digvijaya Singh, other senior Congress leaders, ministers, MLAs and even SP, BSP and independent MLAs are expected to attend this dinner, sending out a message that the ruling party stands strong with its supporters.

The Congress along with its supporters has a claim of 121 seats in the 230-member house, while with the resignation of Jhabua MLA, G.S. Damor after his election as member of parliament, the tally of the BJP is down to 108 in the houses.

With these numbers, the Congress does not seem to have too much to worry, but the constant rumours of bickering of Chief Minister Kamal Nath with ministers considered to be supporters of Jyotiraditya Scindia has been given the Opposition fodder to claim chinks in the ruling party.

A minister of Scindia camp had got into a spat with the chief minister during a recent cabinet meeting and after that some ministers of the camp had dined together, apparently to chalk out strategy in case some of them were dropped during cabinet expansion.

A cabinet expansion is imminent in the state so as to accommodate SP, BSP and independent MLAs to keep their support, and the moves of Scindia camp had brought discomfort to the party, sources said.

The move by the senior leaders to send out the message of unity by having food together is being considered as well planned at a time of crisis in other parts of country.

The Congress spokesperson Narendra Saluja, however, said that both the lunch at chief minister’s residence and the dinner at minister’s place were non-political and more of a friendly get together. He said chief minister and Scindia discussed issues of development during lunch.

Meanwhile, at a press conference earlier, Scindia called for an energetic leader as the Congress national president who could take everyone together. He said it was high time a choice in this regard was made.

He ruled out any danger to the Congress government in MP saying that though the BJP is known to make back-door entries where it cannot win directly, in MP any such thoughts of the Opposition party would turn out to be a daydream.