Triple talaq bill: Congress, other opposition parties in a fix 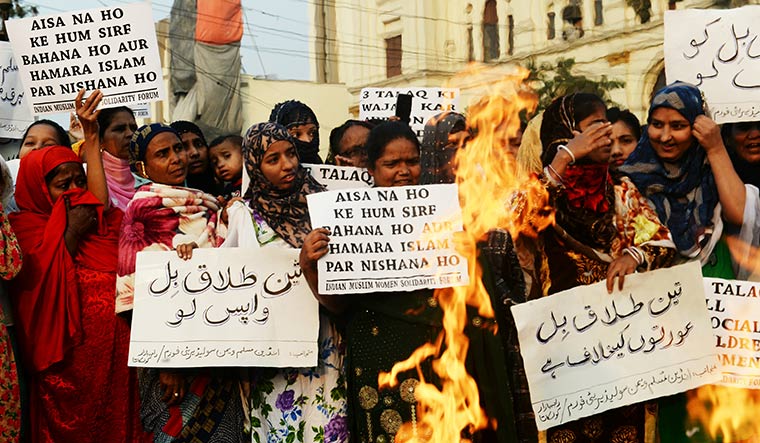 The Narendra Modi government has decided to push the triple talaq bill through in the coming session of Parliament, and this brings into focus yet again the dilemma of the Congress and other opposition parties with regard to the contentious legislation.

The Modi government's effort would be to pass the bill in the coming session of Parliament, the legislation replacing the ordinance of the same name: The Muslim Women (Protection of Rights on Marriage) Ordinance. The ordinance had been promulgated twice by the Modi regime in its previous term after the bill was passed in the Lok Sabha, but could not be introduced in the Rajya Sabha in the face of stiff resistance from the opposition parties.

Led by the Congress, the opposition parties—which have a numerical edge in the Rajya Sabha—had faulted the triple talaq bill on technical grounds. Their main objection to the triple talaq bill is the provision of a jail term for the husband, and the opposition parties argue that an offence that has traditionally been in the realm of civil law cannot be dealt with under criminal law.

These opposition parties have also raised issues such as the proposed law being ambiguous on who would bear the burden of proof of evidence—the accused husband or the woman against whom instant triple talaq has allegedly been pronounced.

The parties opposing the bill had demanded that it should first be sent to a standing committee and be introduced in the House after it was vetted by the parliamentary panel.

The opposition to the triple talaq bill, while couched in technical reasons, is actually prompted by political compulsions. In fact, the proposed legislation has put the Congress and other parties in a fix on how to deal with the issue.

A senior Congress leader said the BJP's main motive behind bringing the triple talaq bill is to trap the opposition parties in a Catch-22 situation. “If we oppose the bill, we will be projected as being against justice for Muslim women and we will be charged with practising appeasement of minorities. If we back the bill, the Muslim voters will turn away from us,” said the leader.

It has not been easy for the opposition parties to protest against the triple talaq bill and they have been at pains to declare that while they are in agreement with the Supreme Court's verdict banning instant divorce, they are opposed to certain aspects of the proposed law.

“A lot of time would have been saved if the government had agreed on our points earlier. Now one or two issues are left—for example, financial security for the family—on which we will debate and oppose,” said Congress spokesperson Abhishek Manu Singhvi, when asked what the Congress's stand would be when the bill is brought afresh in the coming session of Parliament.

The ruling dispensation has been pushing for a law against instant triple talaq, projecting it as a measure intended to provide justice to Muslim women. The BJP promised in its manifesto for the Lok Sabha elections that it would bring in a law banning pronouncement of instant triple talaq.

The Modi government, in the pre-session all-party meeting to be held on June 16, is expected to seek the support of the opposition parties in ensuring passage of the triple talaq bill. Passing the bill in the Lok Sabha, where the NDA enjoys a huge majority, should be easy. However, the Rajya Sabha could yet again prove to be a stumbling block for the bill since the opposition parties have numerical dominance in the upper house.