Zakir Naik: Google lists Modi as top criminal but not me as top terrorist

“When you Google number one criminal in India you get Modi”

In a world exclusive interview given to THE WEEK, Islamic preacher Dr. Zakir Naik defended against the charges India has levied against him using Google search results as his proof.

“When you Google number one criminal in India, it turns out to be Modi”, Zakir said to Namrata Biji Ahuja, who interviewed him at his residence in Putrajaya, Malaysia. “When you Google Zakir Naik, it does not come [as] number one terrorist.”

Zakir is accused of money-laundering and of inciting terrorism by Indian authorities.

The reason why Google displays such results has more to do with its algorithm and the nuances of Search Engine Optimisation (SEO) than with the comparative legalities surrounding Zakir and prime minister Narendra Modi.

The issue with Modi appearing in top ten criminal lists on Google dates back to a 2015 controversy, when Modi’s image appeared in searches for “top ten criminals in India”. Google later apologized for its search results in a statement, blaming the way certain websites had described their image metadata.

Zakir adds that despite apologizing, Google could not alter its results because of the way its algorithm functioned. The result is that when you search for “number one criminal in India” on Google even now, “Narendra Modi” is the first, highlighted result. These results are automatically-generated and are known as featured snippets.

Google’s “featured snippets” have been around in some form since 2013. Earlier known as “Quick Answers,” they used to be based on Google’s own information. In 2016, they were upgraded to include content sourced from the top ten queries and named “featured snippets.” These received another major overhaul in 2018, allowing them to display more relevant information and sometimes more than one snippet.

While most websites try to tune their SEO to become the number one result on Google’s search page, the featured snippet occupies a prestigious “number zero” position, above all the other results. This snippet is generated based on what Google think is the best answer to the search query. 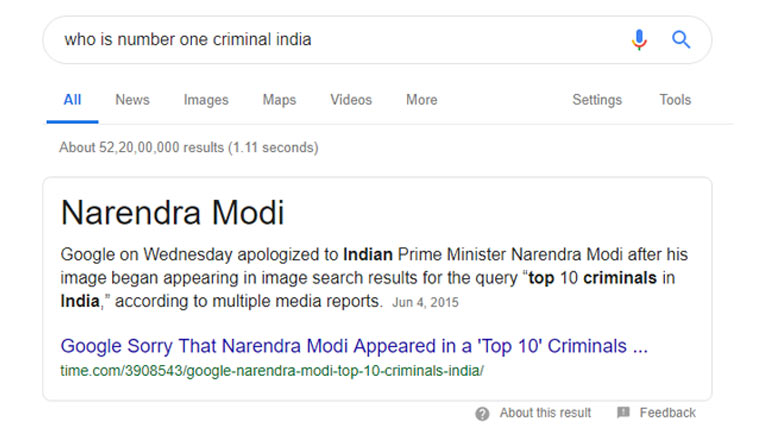 Ironically, the page that the “top ten criminals” featured snippet links to is a Time article titled “Google Is Sorry That India's Prime Minister Appeared in a Top 10 List of Criminals”. Stopping short of listing Modi as the number one criminal, the article contains enough relevant keywords for Google’s algorithm to treat it as the “answer” to the searched question. This is why Modi shows up as the “number one criminal in India.”

According to SEO toolset provider Ahrefs, the top keywords that tend to generate featured snippets include words like “number”, “list” and “top”. Additionally, websites that tend to be on the top ten search results are far more likely to be picked for their snippets.

What does this have to do with Zakir Naik?

To start with, the top-ranking websites have not made lists including him in an SEO-optimized group of names involving radical terrorists or preachers. In addition, while the NIA has charged him of making incriminating speeches, they have not accused him of being a terrorist. The official charge is of money laundering — and when one Googles “Islamic preacher money laundering”, the results are filled with Zakir-related stories (not picked up by the featured snippet, as the query is not a question).

Manipulating Google results has become a pastime for many. The most recent example of “Google bombing” has been for the search query “bad writers” which links to images and posts about Game of Throne’s showrunners D.B. Weiss and David Benioff, whose final season has been much criticized by fans.