World Exclusive: How Zakir Naik became a man of contradictions

The controversial Islamic preacher spoke exclusively to THE WEEK 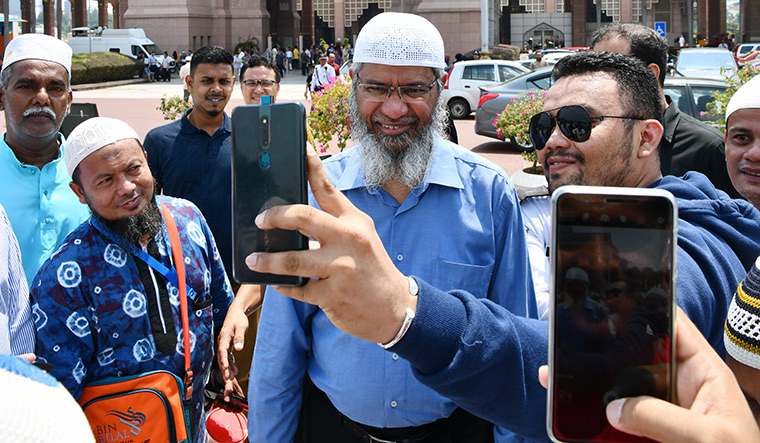 Leader of the faithful: Zakir Naik outside the Putra Mosque at Putrajaya, Malaysia.

“He is a good man,” a young father told his five-year-old son as they hurried across the road to greet Dr Zakir Naik, as he stood outside the Putra Mosque at Putrajaya in Malaysia on May 3.

It was 1pm, and Naik was on his usual Friday visit to the famous mosque, barely 100 metres away from the office of Prime Minister Mahathir bin Mohamad. Putrajaya is the administrative capital of Malaysia, and every few weeks, the prime minister himself attends Friday prayers in the mosque.

Wearing blue shirt, black trousers and a skullcap, and sporting his trademark beard, Naik had reached just in time for the prayers. He smiled and nodded as I met him outside the mosque, and we entered Allah’s peaceful abode. Non-Muslims, including women, are allowed to enter the mosque on most days. Naik informed me, almost apologetically, that I would not be able to enter the main hall during the prayer. But I could go to the women’s enclosure on the first floor. The women in the mosque happily took me there, and one of them even gave me a hijab to wear if I did not mind.

Watching Naik pray had me wondering: What goes on in the mind of the preacher who has influenced millions of people worldwide?

According to investigators, Naik’s speeches have inspired young people to carry out terror strikes—like the ones in Sri Lanka on April 21 and in Dhaka in 2016. The youth in India who wanted to join Islamic State had apparently been his followers. Was he their actual inspiration? No one knows.

An hour passed and the prayers got over. Naik put on his black shoes and stepped out. His walk was brisk; he is a man of purpose.

The Putra Mosque overlooks a lake. The street leading to it buzzes with shops, eateries and rent-a-cycle stores. Tourists in colourful skirts and hats, and hijab-clad women with children, strolled around.

Naik attracts a crowd each time he sets foot in the area. The father who hurriedly crossed the road to meet him joined a mass of people angling for selfies. Zakir smiled, bent down and patted the young man’s son. “Let us pray for his peaceful stay in Malaysia,” the father told the son, before the three of them posed for a selfie. 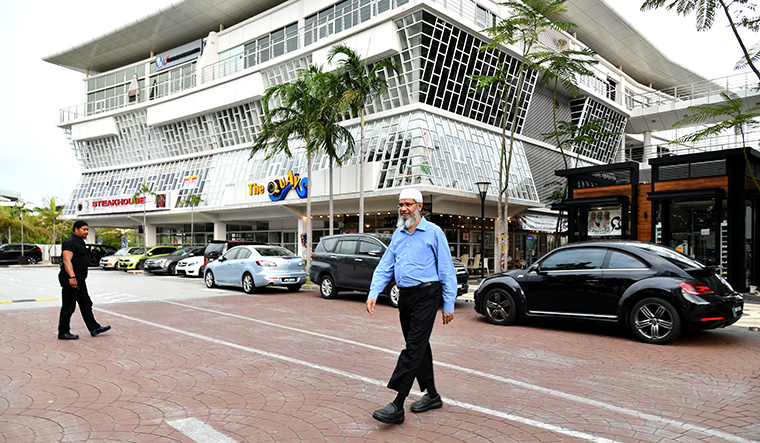 Hopes in exile: Naik outside a mall in Malaysia. He says he would “love to remain an Indian”, though Malaysia has granted him permanent resident status.

A tout who was hailing tourists through a loudspeaker saw Naik and announced a welcome. Naik smiled, continued to greet people, and walked on. “I don’t want to stay here too long,” he told me. “People will keep coming; we can leave.”

The two bodyguards who hovered nearby served as a reminder that he was no ordinary man. For India, he is a fugitive from justice, wanted in terror and money-laundering cases. Quoting the Quran, Naik describes himself as someone who has performed the hijrah. Like Prophet Muhammad, he had migrated to a foreign land fearing persecution at the hands of the enemies of Islam.

Malaysia has granted Naik permanent resident status, ignoring India’s protests. Mahathir has defended his government’s decision to allow him a peaceful stay in the Muslim-majority country. “We do not easily follow the demands of others. We must look at all factors before we respond. Otherwise, someone will become a victim,” he said after meeting Naik in July 2018, when India formally requested his deportation.

The most famous Islamic preacher in the world, Naik runs a satellite television network called Peace TV, which claims to have a viewership of more than 200 million. Every day, he said, hundreds of people around the world convert to Islam after listening to his preachings. He is the only Islamic scholar who can quote at will from the scriptures of four religions—Islam, Hinduism, Christianity and Judaism.

“I am a messenger of peace,” he said. “Even if just one person gets salvation in the life hereafter by following what I preach, I will be the happiest.”

What about those who listen to him and then decide to kill others? According to Naik, not even a single word uttered by him could have misguided a person, let alone made that person choose the path of terror.

Naik lives in Precinct 8, a 15-minute drive from the Putra Mosque. We took an elevator to his apartment, where his wife, Farhat, received us. The apartment was hardly big—it had three bedrooms, a small kitchen and a drawing room with a huge television.

Naik and his wife, who are in their fifties, lead a simple life. They have three children—one son and two daughters, all studying in Riyadh. In their absence, life is cheaper than in Mumbai. “There, I used to give my wife Rs 40,000 a month for household expenses,” he said. “Here, our expenses don’t cross Rs 34,000.”

Naik eats out occasionally, alternating between Arabic and Indian cuisines. The day THE WEEK’s Chief Photographer Sanjay Ahlawat and I had lunch with him, Naik got the leftover food packed and brought it home.

He made no bones about the crores he had earned from his business ventures, which are spread across India, the UK and the Middle East. The Prophet, too, was a businessman, he said. “Is there a rule that a religious preacher cannot do business?” he asked.

Were you always so religious, I asked him. “Earlier, like an average Muslim, I prayed, but there was no preaching in my life,” he said. “I was inspired by Sheikh Ahmed Deedat, a [South African] preacher and Muslim scholar of the Bible. I first met him in December 1987, when I was a second-year student at medical college. Before that, I had seen a couple of his video cassettes. When he came to India, we organised a lecture. After meeting him, I got inspired.”

So Naik completed his studies and started the Islamic Research Foundation in 1990. After he opened the IRF’s first office in 1991, Naik asked his father whether he could spend two hours a week there. He soon asked permission to spend two hours a day. Gradually, Naik began to spend half his workday at the IRF office, and then turned to full-time preaching.

“I asked my mother again who she wanted me to be like—Barnard or Deedat?” he said. “She said she can sacrifice a thousand Barnards for one Deedat. That was how I started doing dawah (proselytising).”

Zakir had a stammer since he was a boy. “I could not have dreamt of speaking in front of 25 people,” he said. “We used to have a lecture every Sunday and a friend used to deliver the speech. One day, he asked me to handle the Q&A session. Though I got a cold sweat on stage, I started answering without stammering. That was how it started, in 1991.”

Today, Naik is known as a master orator, one who is at ease both on and off camera. “Ask me anything about photography,” he told Ahlawat. “I love to use the camera and I know exactly which lens to use and which shots to take.”

What Naik cannot grasp, however, is why he is being labelled a messenger of hate. “The enemies of Islam are targeting me,” he said. “I feel Prime Minister Narendra Modi has chosen to terrorise the most popular Muslim for his vote-bank politics.”

Although they lead a peaceful life in Malaysia, Naik and his wife miss India. “I call myself patriotic in the true sense of the word; not by the definition of some politician,” he said. “A patriot is someone who loves the country, who is willing to die for the country. I am willing. I consider myself an Indian and a Muslim. I have not broken a single law. And no court has given a verdict against me. I would love to remain an Indian.”

A preacher herself, Farhat used to head the IRF’s women’s cell. “Bombay used to be so hectic,” she said. “Both of us used to be so busy.” Today, her schedule is limited to giving a few lectures over weekends, when young mothers and girls gather to listen to her in an apartment next door. She also cooks and helps him prepare his lectures.

Curious, I asked Naik what he enjoyed more: her cooking or her preaching? “My wife should do things she enjoys,” he said. “If she can do something better than cooking, then why should she waste her time?”

Naik said he did not believe in subjugating women. “But tell me, sister: If I chose not to shake hands with a woman, can she accuse me of improper behaviour?” he asked. He recounted how a lady extended a hand to him once during an event. “I refused to shake hands,” he said. “Then I was told that it was disrespectful. Sister, how can it be disrespectful? I respect her, but my choices should also be respected.”

He also explained why he chose not to look at me while he talked. “I can only glance at you. A practising Muslim cannot stare at a woman,” he said.

On the second day of the interview, Naik and his wife offered us butter chicken and rice for lunch. We politely declined, saying we were more keen on continuing the conversation. “Zakir is so particular that he used to go to the extent of paying for his tea at IRF,” said Farhat. “Ironically, he is now accused of money -laundering.”

In the evening, Naik went to a small mosque nearby to pray. He is a staunch believer, but what stood out during our conversations was his willingness to engage with sceptics.

“Tell me ten things you find wrong in Islam,” he asked me as we took leave of him. I replied that I was too small a person to criticise any religion, and that all religions were good.

He persisted, so I finally told him that some of his teachings, perhaps, were not being understood in the right way. And, I ventured, he might need to tone down his rhetoric.

“If certain words uttered by me have brought more harm than good, then I have changed it,” he told me. “I don’t say it anymore, because they are not understood correctly. But, why should I tone down my speech? I will tone it up instead, if it means speaking the truth, taking people to the path of God, and making them good human beings.”

So, was that the ultimate aim of his life? “My aim in life,” he replied, “is to enter the highest level of paradise, in the company of the Prophet.”