Zakir Naik: George Bush did 9/11, Bin Laden neither a terrorist nor a saint

The popular Islamic preacher clarifies his most controversial statements 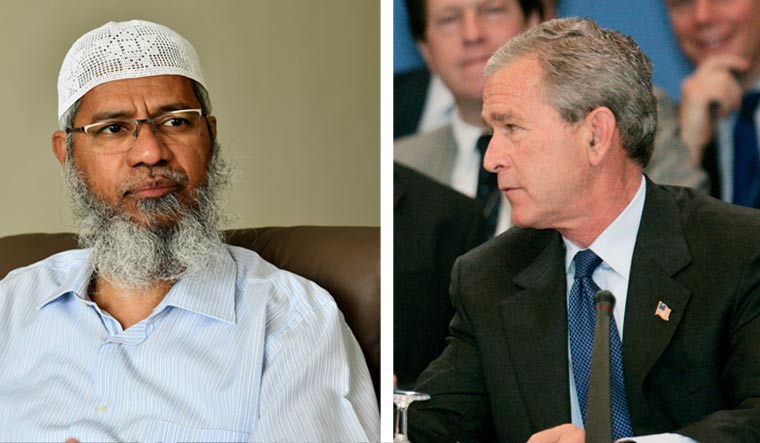 Zakir Naik made his views on George Bush clear in his interview | Photos by Sanjay Ahlawat (left), Reuters (right)

Known for his controversial statements, Zakir Naik has associated world leaders with terrorism in the past, most notably George Bush Jr, who he calls an example of white-collar terrorism.

Reiterating that he considers Bush a terrorist (while his verdict is still out on Al Qaeda), he says, “He has gone out of his way to kill millions of people. You can see it in his eyes.”

Zakir adds, “Even if you agree with all the allegations that have been put on these organisations, [the death toll of] Al Qaeda runs into few thousands — not millions. George Bush is millions. And I call [that] white-collar terrorism.”

Zakir has consistently blamed George Bush for the 9/11 attacks, a position he sticks to today saying he has done his research. His views on Osama Bin Laden, however, are less critical.

Searching for Zakir Naik’s name on Google often throws up his controversial statement on Osama Bin Laden where he said, “I am with him. Every Muslim should be a terrorist.”

His statement was part of a larger speech that he made in 1998, where he said, “If he [Bin Laden] is fighting enemies of Islam, I am for him... If he is terrorising the terrorist, if he is terrorising America — the biggest terrorist — I am with him.”

He clarified this statement, which is often used against him, in his interview with Namrata Biji Ahuja.

“I don’t call him a terrorist and neither do I call him a saint. I do not know,” he says. Citing the Quranic verse Surah Al Hujurat (49:6), which calls for believers to investigate claims made against another, Zakir highlights the importance of personally fact-checking claims made by the media. As he asks, “Is it a must that to go to paradise, you have to put the blame on Bin Laden?”

Zakir clarified to THE WEEK that he has since stopped using the controversial line, “All Muslims should be terrorists,” in his speeches — because he feels it was misinterpreted. He says he is ready to change and is open to criticism, insisting that “not one person” went down the wrong path by listening to him.

Zakir had initially taken a similar approach to ISIS, with regards to media reports of the group. “To tell you frankly, I don’t believe everything that the media says,” he says. However, he feels ISIS is better described as the “anti-Islamic State” and is critical of their activities.

He feels it is important to do one’s research first before labelling someone as a terrorist.

“I know I am innocent and know that all these people allowed themselves to be misguided by the media and will be held responsible on the day of judgement. This is the only reason I do not call anyone a terrorist unless I have personally done research on him and am satisfied with it. Just because I abstain from calling a person a terrorist does not mean that I am supporting him or disagree that he is a terrorist. I only say I do not know. Similarly, if someone has proof that he is a terrorist I will not force him to say Bin Laden is not a terrorist. Then why are these people forcing me to say something on which I have not done my research.”