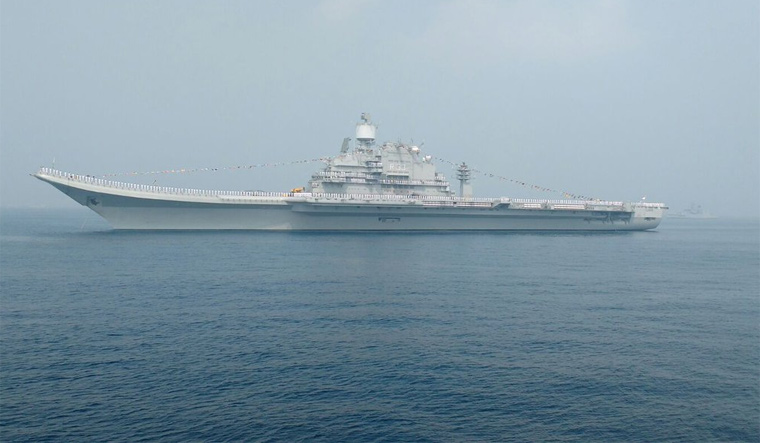 An Indian Navy officer died while controlling a fire that broke out in the country's biggest warship INS Vikramaditya. The incident happened on Friday morning when it was entering the harbour in Karwar naval base in Karnataka.

"Lt Cdr D.S. Chauhan bravely led the firefighting efforts in the affected compartment. Whilst the fire was brought under control, the officer suffered loss of consciousness owing to the smoke and fumes during the firefighting efforts. He was immediately evacuated to the Naval Hospital at Karwar, INHS Patanjali for medical attention. However, the officer could not be revived," the Navy said in its statement.

It added that the fire was brought under control by the ship’s crew in a swift action preventing any serious damage affecting the ship’s combat capability.

According to the Navy, a Board of Inquiry to investigate into the circumstances of the incident has been ordered.

This is the second tragic incident on INS Vikramaditya. In 2016, two people were killed following a leakage of toxic fumes from the sewage plant onboard the Russian-made aircraft carrier.

INS Vikramaditya is India's largest naval ship and is equipped with a variety of integral weapons and sensors and it was undergoing maintenance repair since June 1.

The aircraft carrier joined Indian Navy fleet two years ago in June, 2014. Commissioned on November 16, 2013 at Severodovinsk, Russia, the 44,500 tons displacement INS Vikramaditya is positioned at the Karwar naval base.

With an overall length of 284 metres and a width of 60 metres measuring over three football fields, this floating airfield is equipped to carry a maximum of 34 aircraft such as MIG-29 K fighters and Kamov-31 helicopters. The ship has a total of 22 decks. With over 1,600 personnel onboard, Vikramaditya is literally a ‘Floating City’.

Manned by a highly professional and competent crew of 110 officers and 1,500 sailors, the ship can propel at speeds over 30 knots on the strength of her eight boilers producing a combined thrust of 1,80,000 Shaft Horse power.