PM has stolen money belonging to IAF and given it to Anil Ambani, says Rahul 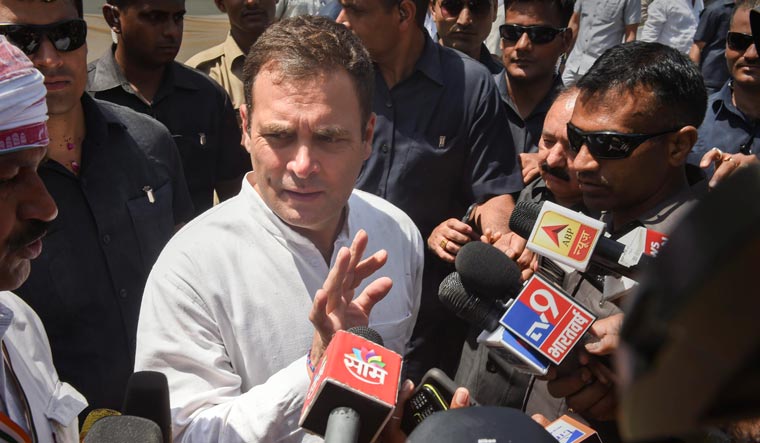 The Supreme Court's verdict on the Rafale fighter jets deal on Wednesday, right on the eve of the Lok Sabha elections, has given fresh ammunition to the opposition to attack the Narendra Modi government. The opposition parties stepped up their offensive on the prime minister, stating that his purported role in the alleged corruption in the purchase of the French fighter aircraft now lay exposed.

A three-member bench of the top court dismissed the government's contention that documents about the purchase of 36 Rafale fighters were inadmissible. The court also announced it would set dates soon for hearing a batch of review petitions filed against its December 2018 verdict that found no irregularity in the Rafale deal.

In the light of the Supreme Court's decision, Rahul also reiterated his challenge to Modi for a debate on corruption. “Narendra Modiji, let us have a debate on corruption in a cordial atmosphere. The chowkidar is shying away from the debate because he knows that the day he has a debate with me on corruption, he will not be able to see his countrymen in the eye.”

The Congress, playing on its campaign slogan, declared Ab Hoga Nyay (Now, there will be justice), while party spokesperson Randeep Surjewala said at a party briefing at the AICC headquarters: “Repeatedly, Modji had referred to the Supreme Court's decision to claim that he and his government were given a clean chit in the Rafale matter. To hide the corruption in Rafale, chor chowkidar spoke a hundred lies. Ultimately, the truth is out – the Rafale theft was carried out by chor chowkidar himself.”

BSP supremo Mayawati tweeted that the prime minister has made an unsuccessful attempt to hide the “grave corruption” that has taken place in the Rafale deal. “The BJP government is completely cornered in the Supreme Court,” she said, demanding that Modi and Defence Minister Nirmala Sitharaman should seek apology from the nation for “lying repeatedly” on the issue and “misleading” the country.

The defence ministry sources, meanwhile, said that the petitioners are using documents with the intention to present a selective and incomplete picture of internal secret deliberations on a matter relating to national security and defence. The sources claimed that the documents presented by the petitioners fail to bring out how the issues were addressed and resolved and how necessary approvals of the competent authorities were taken.

They further said that the government had provided the requisite information to the court as well as to the petitioners. The main concern of the government, they said, was relating to availability of sensitive and classified information concerning national security in the public domain.