Burned by Emergency and spurned by Rae Bareli, Indira turned south in 1978 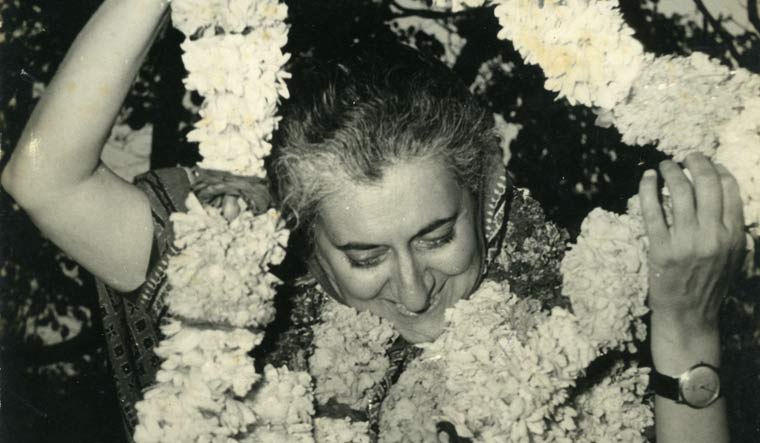 In the early hours of April 2, the Hanumanthappa Circle in Chikmagalur was remarkably quiet, even more so than usual. Trucks milled around, unloading earthen pots, but the early-morning vegetable carts were nowhere to be seen. Instead, mango leaves—usually hung atop doors as a sign of festivities, spring blossoms and assorted greens were spread out in heaps.

It was the day of Ugadi—the Hindu New Year—when families all around consumed a mixture of neem leaves and jaggery, which, apart from its mythical health benefits, served as a tangy reminder that life was a mixture of the sweet and the sour. A culinary metaphor for the ephemerality of the cloud nines of bliss and the seven hells of despair.

In 1978, burned by the Emergency and spurned by her trusty Rae Bareli—which chose Janata Party’s Raj Narain over her—Indira Gandhi turned her gaze south. Chikmagalur, nestled between the Western Ghats, was fated to be the grand stage for her political comeback. How did she come to that decision?

According to Indira’s biographer Katherine Frank, Chikmagalur was an “ideal constituency” for her—50 per cent women voters, 45 per cent backward, scheduled castes and minorities, and nearly half the population living below the poverty line.

Then there was the personal popularity of Congress (I) chief minister of Karnataka, Devaraj Urs, who was widely hailed as a messiah of the downtrodden, with his successful implementation of numerous social measures like the Land Reforms Act. Urs successfully built a coalition of backward castes, scheduled castes and minorities—former chief minister Siddaramaiah’s AHINDA is considered its political successor—which kneecapped the Lingayat-Vokkaliga pincer-hold over Karnataka politics.

Poke a little into the memories of Chikmagalur and images of Indira come streaming out in vignettes. There was the Indira, dressed in slippers and sari (her toes were very demure, local residents claim), interacting with the masses in rapid Hindi. There was the Indira who spent most of her campaign days at the residence of Congress leader D.M. Putte Gowda in Mudigere, downwind to Chikmagalur city. Gowda was later rewarded with parliamentary tickets. There was the Indira, who stopped every five minutes on the trail, calling out kahaan hain woh (where is Urs)? Ironically, two years down the line, Urs would leave the Congress after a fallout with Indira over her beloved son Sanjay Gandhi.

There was the Indira, whose favourite snack was raw cashew nut, and whose hands would automatically rise to her chest every time she passed the dargahs and temples that dotted the MG Road. There was the Indira, whose fiery speeches promised industrialisation and upliftment of the weakest of the weak. She never faltered, even in the face of intense opposition from the Janata Party’s star campaigner, George Fernandes, a wounded son of the soil. She was a ‘cobra’ and a dictator, Fernandes contested.

Then there was the Indira who silently withdrew from the campaign trail, after the death of a first-year BA student Gayatri in Karnataka police action.

The love saga ended the way anyone would have thought it would. The mountains were enamoured with the fallen empress with fire in her eyes and honey on her lips. On the day of the polls, the heavens burst forth in all their fury. But nothing was enough to prevent almost 70 per cent of the electorate—the largest ever recorded till then in the constituency—from turning up to help Indira beat opponent Veerendra Patil by 77,000 votes. When it rains in Chikmagalur, it drenches.

“The rains are late this year, so will be the coffee blossoms,” says A.S. Shankar, a planter, a palpable impatience detected in his voice. He owns a 160-acre estate on the outskirts of Chikmagalur, a joint operation with family and friends. He cultivates arabica coffee, along with robusta beans and areca. The latter, he rues, attracts a lot of wild elephants. “You remember the Kerala floods [2018]?” he asks. “It rained non-stop here for days. So much of our crops were destroyed. The coffee prices are at an all-time low.”

Chikmagalur is known as the coffee capital of Karnataka, producing some of the highest-quality coffee beans in the country. But, with the price of the commodity tanking in the international market and cost of labour sky-rocketing, the domino effect threatens to bring the coffee industry to a standstill. “Add to that,” says Shankar,” the coffee plantations here are blighted by the white stem borer [a pest], which leaves all the stalks hollow. We still don’t have any efficient method to tackle it. If we go for a whole new crop, it will take seven or eight years for the yield to stabilise. Who will pay our bills till then?” Three other estate owners THE WEEK spoke to echoed similar concerns.

In the early hours of the morning and late evening, pickup trucks, filled to the brim with labourers from the plantations, transporting them between the DC office and the estates, are a common sight.

“It is sad,” says Amjad, a labour union leader associated with the Communist Party of India (CPI). “There are at least 50 people in a truck, carted to and fro like animals,” he claimed. The labour dynamics have rapidly changed over the years. Labourers—mostly from North India—used to work directly under the estate owners, with their own housing facilities. But, now, the out-of-state labour is largely seasonal and the bulk of the labour force comes from nearby villages, working under sub-contractors who acted as middlemen. The result: no employee benefits or insurance of any sort.

“They say the pay is Rs 350 per day,” says Amjad. “But, there is no minimum wage as such. Depending on how much work you manage to finish in a day, it can go up or down. The industry is going through a churn. The government urgently needs to announce support prices,” he said.

On the other side of the city, THE WEEK met with Shyam Prasad, a youngster who identified himself as a textile merchant. He looks quizzical when asked about Indira. “I don’t know anybody who voted for her. To kya (so what)? Times have changed, no?”

“She is no longer a pull for people in the state,” says veteran journalist and editor of Janamithra, Girija Shankar. “In 1978, Indira promised us a general hospital and railway connectivity. Nothing materialised. We got a railway station in 2014, when Mallikarjun Kharge headed the ministry. We were only a platform for her political aspirations,” Shankar rued.

The petrichor of Indira’s fame has long faded from Chikmagalur, and along with it the Congress party’s fortunes. Since the 2000s, the Congress has never managed to secure the parliamentary constituency. In 2008, after de-limitation, the constituency became Udupi-Chikmagalur.

It is currently represented by BJP’s Shobha Karandlaje. The constituency now consists of the assembly constituencies (ACs) of Kundapura, Udupi, Kapu and Karkal—all part of Udupi district, and strongholds of the BJP—and Chikmagalur, Mudigere (SC), Sringeri and Tarikere, from the erstwhile Chikmagalur constituency. Geographically speaking, Mudigere and Sringeri form the transitional regions, while Tarikere is in the plains—a important gateway to Malnad. Except Sringeri, they are all now in the hands of the BJP.

How did this saffron surge come to be? There was once a time when anyone who contested on a Congress seat would win from Chikmagalur, says Girija Shankar. “But that is not the case anymore. The party needs a strong leader with a district-wide connect, someone like Yeddyurappa in Shimoga or Mallikarjun Kharge in Bellary.”

In January, some sections of the Karnataka Congress party made a very strange request to the high command: Priyanka Gandhi—who looks astonishingly similar to her grandmother—should contest from Chikmagalur. Her entry will create a Congress wave, not unlike 1978, district Congress spokesperson Ruben Moses said.

What is the X factor that the Congress is banging on to win back the constituency? “We understand that the Congress-JD(S) combine can reach mathematical majority in Chikmagalur,” says senior Karnataka Congress leader B.L. Shankar. “The BJP is strong in Udupi, so we have chosen a popular candidate from that district—a former minister who hails from a political family. If we can tip the scales in Udupi, we win the parliamentary constituency.”

What the party needs right now is a leader like Indira, says former minister and three-time MLA Sageer Ahmed. “I still remember the time I went to meet her in Delhi. She was so firm and yet so kind at the same time. Chikmagalur is a cosmopolitan place. How else would I win three times from here? We need someone like Indira, who can unite everyone, irrespective of caste and religion. Do we have a leader like that in our country?” he asks. Kahaan hain woh!

The Baba Budangiri shrine is located high up in the Mullyangiri ranges, an hour’s ride from Chikmagalur city. The shrine was supposed to be a symbol of the shared heritage of Hindus and Muslims in the state—it is named after Hazrat Dada Hayat Meer Qalandar, who is believed to be the Hindu god Dattatreya himself. The shrine was a place of worship for believers from both the religions.

But, at the peak of the Ram Janmabhoomi movement, saffron organisations like the VHP and RSS had demanded that the shrine be converted into a Hindu temple. This demand captured momentum, and soon snowballed into an electoral issue from which the Congress could never recover. The RSS organisations fought the case in the Supreme Court, which ordered for status quo to be maintained, but they have appealed again in the Karnataka High Court.

In December 2017, The NewsMinute reported that Chikmagalur BJP MLA C.T. Ravi visited the shrine, made inflammatory statements and proclaimed he was in possession of documents that proved this was a Hindu site. Minutes after his visit, devotees allegedly hoisted saffron flags at the site and destroyed some graves of the Sufi saint’s followers. This led to a confrontation between the communities and stones were pelted at vehicles that passed by. Since then, the Datta Teertha—which is held every December—and the annual Urus—held every March—came under heavy police protection. 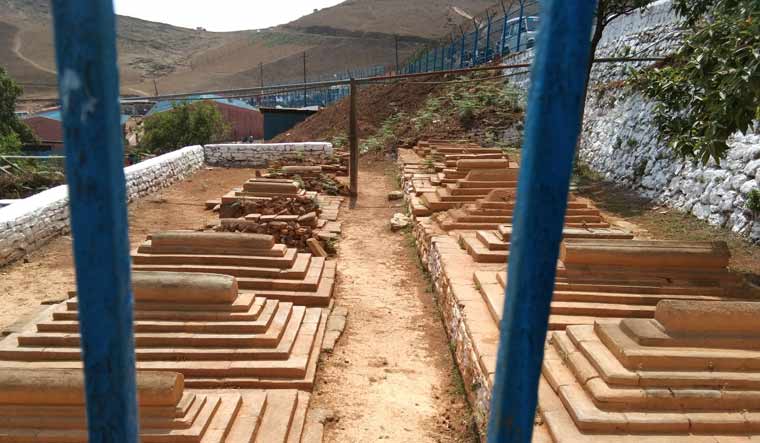 “This is a ploy straight out of the BJP’s coastal Karnataka playbook,” says B.L. Ashok, the chairman of the Karnataka Communal Unity Forum, which is the fighting the case in the Supreme Court. “They are subverting the minds of unemployed youths. The Congress has been as bad as the BJP on this issue.”

When THE WEEK visited the site, Hindu women were entering the cave after respectfully covering their heads and Muslim saints served prasada water inside the cramped, slightly narrow confines of the shrine. “There were no issues until the Bajrang Dal decided to involve itself,” says Mujeeb (name changed on request), a native resident. “A few years back, unlike now, you did not even have to remove your slippers while going in. He was a man with a lot of followers because he cured other people’s diseases. I grew up with the stories that in Urus season (pilgrimage), a tiger would emerge from the cave,” he said.

Chikmagalur VHP leader Yogesh Raj brushes aside the question of Baba Budangiri being an election campaign slogan. “We are campaigning for Modi, not BJP, and all the things that Pakistan is doing,” he corrected me. Right now, he says, door-to-door campaigns have commenced. He leaves me with a rebuke: “It is Datta Peeth, don’t call it Baba Budangiri.”

This article is part of a series on the 'safe seats' the Congress embraced in the south: Chikmagalur, Bellary, Medak and Wayanad.