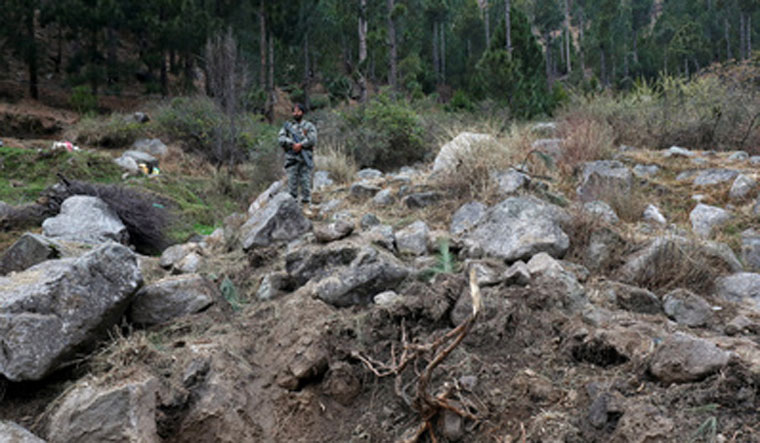 A Pakistan's army soldier stands at the edge of a crater, after Indian military aircrafts struck on February 26 in Jaba village, near Balakot, Pakistan | Reuters

Even as the tension between India and Pakistan remain heightened after the Pulwama attack and the ensuing Indian Air Force operation at Balakot, a Pakistan opposition leader on Wednesday questioned the Imran Khan government's actions on banned terrorist organisations.

"We have heard again and again that action has been taken against banned organisations. I don't think so," said Bilawal Bhutto Zardari, Chairman of the Pakistan Peoples Party (PPP).

“They (militants) have been taken into protective custody so that the Indian planes don’t blow them up,” he said.

Bilwal had earlier demanded the sacking of three ministers in the Imran Khan government, accusing them of backing the banned terror outfits.

“The government has responded to my demand to sack Ministers associated with banned outfits by declaring me anti-state, issuing death threats & NAB notices,” Bilwal later tweeted.

Bilwal's fresh attack on Imran Khan came on a day when the United States asked Pakistan to take “sustained, verifiable and irreversible” action against the perpetrators of terrorism, while warning the country that another terror attack on India will prove to be “extremely problematic”.

“We need to see Pakistan taking concrete and sustained action to reign in the terrorist groups, mainly the Jaish-e-Mohammed and the Lashkar-e-Taiba in order to ensure that we don't have re-escalation (of tension) in the region,” a senior administration official told reporters at the White House on Wednesday.

Tension escalated between India and Pakistan after a fleet of IAF fighter jets crossed the border to pound a major training camp of Jaish-e-Mohammad at Balakot on February 26, twelve days after the terror outfit orchestrated a suicide attack on a CRPF convoy at Pulwama, killing 40 jawans.