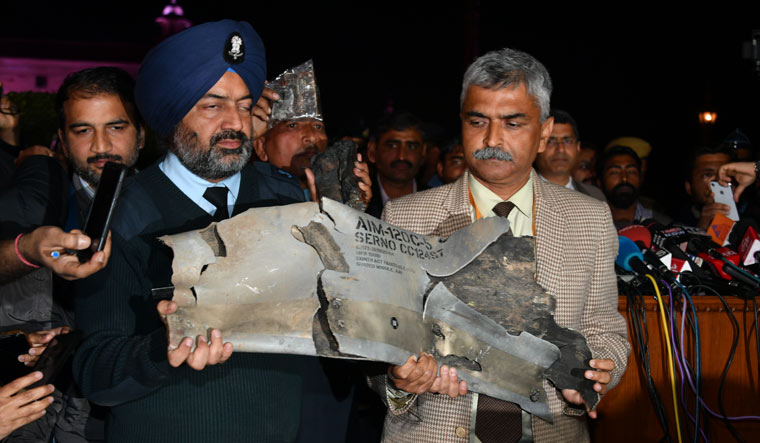 Parts of AMRAAM, an air-to-air missile which is carried only on the Pakistani F-16s, are being displayed at a press meet of three service chiefs in New Delhi | Arvind Jain

Addressing a joint press briefing of the three service chiefs in New Delhi on Thursday, Kapoor said, “Although the PAF jets dropped bombs, they were not able to cause any damage.”.

In the ensuing dog-fight, one Pakistani F-16 was shot down by an IAF MiG 21 Bison aircraft, Kapoor said, and added that there is enough evidence to show that F-16s were used in this mission through their electronic signatures.

Parts of AMRAAM, an air-to-air missile which is carried only on the Pakistani F-16s, were recovered from east of Rajouri within the Indian territory, he said.

During the press briefing, wreckage of the missile was displayed as a proof of Pakistani aggression.

Kapoor said the IAF is happy that Wing Commander Abhinandan, who was arrested by Pakistan Army on Wednesday, is returning to India on Friday.

"We are happy that our pilot, who had fallen across the Line of Control and was in custody of Pakistan, is being released; we're extremely happy to have him back. We only see it as a gesture which is in consonance with all Geneva conventions,” he said.

Responding to a question on the casualties in the pre-dawn IAF strike on a Jaish-e-Mohammad terror camp at Balakot on February 26, Kapoor said it's premature to estimate the number of casualties. “Whatever we intended to destroy, we got that result,” he said.

Talking at the press meet, Major General Surendra Singh Mahal said, “As long as Pakistan continues to harbour terrorists, we will continue to target the terror camps”.

The service chiefs' pre-scheduled press briefing came hours after Pakistan Prime Minister Imran Khan made an announcement in parliament that his country would release Abhinandan Varthaman on Friday as a “gesture of peace”.

The tension between the nuclear-armed neighbours escalated a day after a fleet of IAF Mirage 2000 fighter jets crossed the Pakistan border and demolished a major terror training camp of Jaish-e-Mohammad at Balakot, killing over 300 militants.

India's unprecedented counter-terror operation was in response to the suicide attack at Pulwama in Jammu and Kashmir on February 14, in which at least 40 CRPF jawans lost their lives. The JeM had claimed responsibility of the attack.