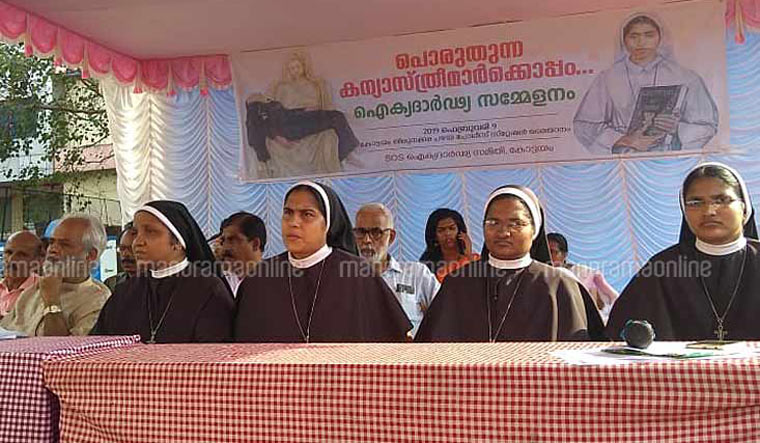 Four Kerala nuns, who were transferred following their active involvement in the protest against former Jalandhar Bishop Franco Mulakkal, accused of sexually assaulting a nun, can now stay back at their convent in Kuravilangad of Kerala.

They have received the permission for this from church authorities concerned, Sister Anupama, one of the four nuns, said in Kottayam on Saturday. The nuns stay at the Kuravilangadu convent along with the survivor, who was not transferred.

The four nuns had been transferred by the Missionaries of Jesus congregation to various locations, months after they had complained at several forums within the church against the bishop. They, however, defied the directive.

The fresh order came last month with a warning that action will be taken against them if they do not comply with the earlier order.

Sister Anupama, who had been transferred to Punjab, said that the transfer order was aimed at punishing the nuns for speaking out against the bishop.

Sr Anupama, Sr Alphy, Sr Josephine, Sr Ancita and Sr Neena were the protesters who had sought justice for the victim nun. Sr Anupama was transferred to Amritsar in Punjab, Sr Ancita to Pariyaram in Kannur, Sr Alphy to Bihar and Sr Josephine to Jharkhand.

Earlier, Sister Anupama had said there was no support from the Church for the protesting nuns and the victim. She had said the transfer amounted to emotional torture and ostracism. “Three nuns holding key posts in Punjab were being purposefully brought to Kuravilangad Convent to torture us,” she had alleged.

The church reportedly cancelled the transfer orders on Friday, a day before the nuns started the second round of their protest in Kottayam.

The Kottayam wing of Save our Sisters organised a protest meet in Kottayam on Saturday.

A group of people under the banner of Global Christian Council staged a protest against the meet.

Police had to interfere after the protesters exchanged heated words. The nuns announced the development at the protest venue in Kottayam as they demanded justice for the nun.

The nuns had earlier protested near the Kerala High Court in Kochi in September last year. Franco was arrested on September 21, 2018, on charges of rape, unnatural sex, criminal intimidation and illegal confinement, three months after the complaint by the victim and protests by her fellow nuns in Ernakulam. In the complaint led on June 28, 2018, Franco was accused of raping her 13 times from 2014 to 2016 at Kuravilangad.

Franco, who got bail on October 15, received a rousing welcome from his followers in Jalandhar when he reached there. Father Kuriakose Kattuthara, who had supported the nuns' protest, was found dead at a church in Hoshiarpur's Dasuya in October last year, months after he deposed against Franco in the rape case.