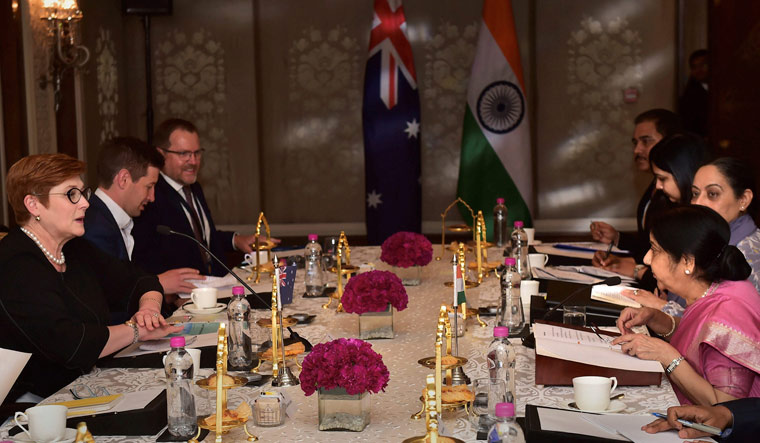 India may have beaten Australia in cricket. But there is only love from Down Under. To woo India is the new mantra, and the Australian foreign minister Marise Payne, on a visit to India, is on a mission to do just that.

There’s no true love without money. In terms of trade, India is the tenth trade partner for Australia and the relationship is off balance. Indian companies invest more in Australia. Trade between the two was 19 billion dollars in 2015–16. China accounted for 150 billion with Australia. This is an issue that Payne’s government wants to fix. “We know that India’s economic growth will re-shape the region’s strategic landscape,’’ said Payne in her address at the Raisina Dialogue.

Australia was “seeking closer economic engagement with India and the region”, she said. In a bid to correct the trade balance a bit, the Australian government has “officially adopted” the recommendations of an important and substantial government commissioned report: An India Economic Strategy to 2035.

This report authored by former high commissioner to India and former secretary of the Australian Department of Foreign Affairs and Trade, Peter Varghese, had identified possible areas of cooperation for both countries, so that Australia could re-balance its economic relationship with India. “The Australian government is backing the strategy, and in doing so, we’re backing the Australian business to help India achieve its unrivalled potential,’’ said Payne.

And “in a significant commitment’’,  Australia has “appointed a ministerial champion for each of the report’s four lead sectors: education, agribusiness, resources and tourism.  The Australians are also reopening their consulate in Kolkata by the end of the year.

While India hopes that Australia will show its love in the best way possible, by bringing in huge investments, the Aussies want a firmer commitment. Their hope? That India will have more cooperation in defence and maritime. Simply? Help them contain China. It is no secret that the Australians want to be part of the Malabar exercise and so far India has been resisting to let sleeping dragons lie.

In her speech, Payne spelt out their vision for an Indo-Australia friendship. “At the heart of that relationship between Australia and India lie our common values. We are both free, open and independent democracies; champions of international law; supporters of an open and inclusive Indo-Pacific; and firm believers that ‘might is not right,’’ she said.

During her visit, Payne met both External Affairs Minister Sushma Swaraj and Defence Minister Nirmala Sitharaman. The question is whether India is armed to teeth for this friendship.