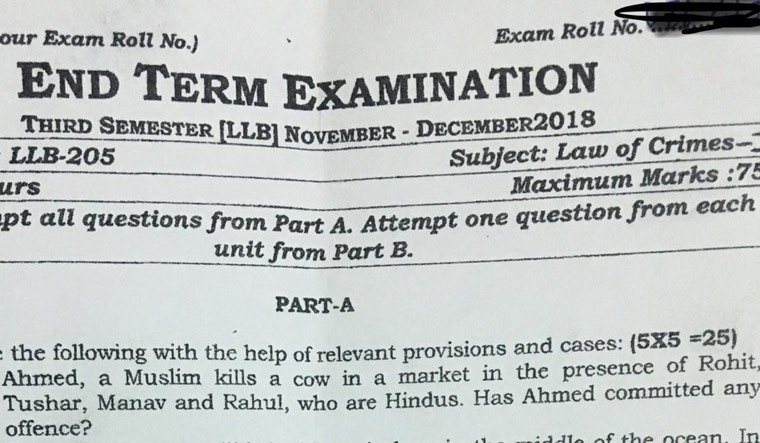 The question paper which created the controversy | via Twitter

The Delhi government on Tuesday ordered an inquiry into the matter pertaining to a question in a law exam paper asking whether a Muslim slaughtering a cow in the presence of Hindus amounts to an offence, while the Guru Gobind Singh Indraprastha University constituted a committee to look into the issue.

The question, which was part of the law of crimes paper for third semester LLB students on December 7, drew outrage after it was highlighted by a Supreme Court lawyer through the social media.

A varsity official said "if anyone is found guilty in the matter, they can be debarred from the examination process."

The question read: Ahmed, a Muslim, kills a cow in a market in the presence of Rohit, Tushar, Manav and Rahul, who are Hindus. Has Ahmed committed any offence?"

Supreme Court lawyer Bilal Anwar tweeted about the question and shared a screenshot of the question paper, tagging the Chandra Prabhu Jain (CPJ) College of Higher Studies And School of Law, Narela.

He also wrote an email to the college and the varsity authorities objecting to the question and demanded action against "such vilification".

"The nature of question paper is highly derogatory in its form and nature against particular class and community. The question blatantly dehumanises one community which is against the very spirit of Constitution of India and the egalitarian values as vindicated by the recent judgement of Hon'ble Supreme Court in "Tehseen S. Poonawalla v Union of India," he said in the email.

The nature is such it cannot be let go since it affects the young legal minds, he said in the email.

On December 9, he posted on Twitter, "Here is a new normal, De-humanising an entire community, A Law College at Narela, NCR's Third Semester Question Paper... Is this what you are making the young legal minds to feel normal about? categorically referring communities in your question papers?"

Reacting to the controversy, the Delhi government said it has ordered an inquiry.

The university also said on Tuesday that a committee has been formed to look into the matter and submit a report within 10 days .

"The Controller of Examinations (Operations), Guru Gobind Singh Indraprastha University, Delhi, taking cognisance of some media reports regarding a question asked in the examination held on December 7 for LB-205 'Law of crimes-1', has constituted a committee to look into the issues involved and submit a report within 10 days," said a statement from the varsity.

The varsity officials said that the question has been deleted.

"No marks will be awarded for the question. Those who are setting the question paper will be issued an advisory that such questions are not asked in the future. If anyone is found guilty in the matter, they can be debarred from the examination process," said a varsity official.