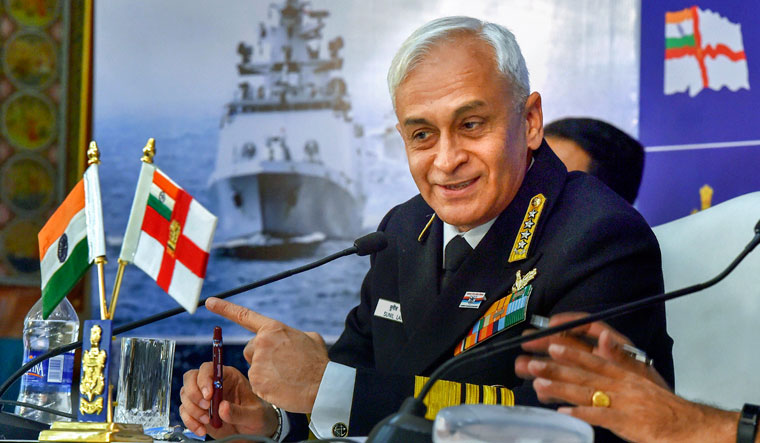 Chief of the Naval Staff Admiral Sunil Lanba at a press conference in New Delhi, on Monday | PTI

“Case for a second IAC has received necessary impetus though it is still a decade away. Construction would be spread over 7-10 years. We will see the start of construction in three years,” Navy chief Admiral Sunil Lanba said addressing the press conference ahead of the Navy Day. The Navy Day is observed on December 4 to commemorate the ship-launched attack on Karachi during the 1971 Indo-Pak war.

The Navy chief also said that India’s first IAC, Vikrant has entered final phase of construction and is expected to begin sea trials in 2020 and it is expected to join the fleet by 2023.

In contrast, China’s People’s Liberation Army Navy is making a significant progress in making aircraft cariers. Last week, it was reported that it is building its second indegenous carrier while the first aircraft carrier is undergoing sea trials and will join the fleet soon.

Last year, the ministry of defence has decided to hold Indian Navy's plan to build the second IAC due to its high cost. Moreover, a committee set up by the defence ministry had also recommended in 2016 to invest money in Andaman and Nicobar Islands for developing longer runways for fighter aircrafts instead of a carrier.

But now, the Indian Navy is making a strong pitch for a second indigenous carrier. The Navy envisages IAC-II to have a displacement of 65,000 tonnes and use a Catapult Assisted Take Off But Arrested Recovery (CARTOBAR) for launching aircrafts. As the programme to build IAC-II will spread over a decade, the cost incurred is expected to be feasible.

In a bid to counter the growing presence of Chinese warships in the Indian ocean region, the government has given its nod for Indian Navy's expansion and upgradation plans with 56 new ships and submarines.

“The government has given approval to have 56 ships and submarines. Some of these will replace the existing fleet and include new ships like fleet ships, submarines and mine sweepers,” the Navy chief said, while adding that the construction plan would be spread across a decade.

This new acquisition will be in addition to the 32 warships and submarines under construction in multiple shipyards in the country.

Responding to a question on the US assessment that China would be a big naval power by 2050, Admiral Lanba said, “By 2050 we will also have 200 ships, 500 aircrafts and will be a world-class navy.”

On the issue of enhancement of coastal security, the Navy chief said that the process for installing automated identification transponders on around 2.5 lakh fishing boats has been started.

On the long pending issue of appointing a Permanent Chairman of the Chief of Staff Committee, who will act as a single point military advisor to the government, Admiral Lanba said the three services have agreed on having a permanent chairman and the proposal has been sent to the ministry for further action.

Responding to questions on the long delay by Reliance Naval and Engineering Limited (RNEL) in delivering five offshore patrol vessels, the Navy chief said that punitive action has been taken against the firm. “The bank guarantees have been encashed. The OPV contract is being examined and there is no preferential treatment to the firm,” Admiral Lanba said.