Farmers to march from Thane to Mumbai pressing for demands

More than 30,000 farmers and tribals are expected to join the march 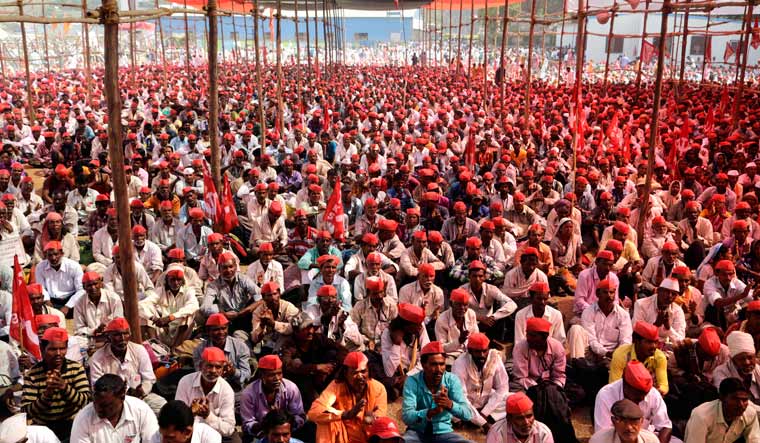 Eight months after a red sea of protesters hit the streets of Mumbai, more than 30,000 farmers and tribals have begun a similar march from Thane to the Maharashtra capital on Wednesday to press for their long-pending demands. The march will begin in Thane toll Naka on Wednesday and culminate at Azad Maidan in Mumbai on Thursday. The agitation at Azad Maidan will continue till their demands are met.

Implementation of the Swaminathan Committee Report, settling of pending claims under the Forest Rights Act (FRA), setting up of a judicial system to ensure MSP implementation, complete farm loan waiver and drought compensation are among the major issues that will be raised by the farmers during the march. The protest has been organised by Lok Sangharsh Morcha.

The Maharashtra unit of Aam Aadmi Party (AAP) has extended support to the protest. It is expected that farmers and tribals from North Maharashtra, Vidarbha, Ahmednagar and other parts of the state will take part in the protest.

The year saw farmers' agitation at its peak, with similar agitations taking place across India. Farmers had undertaken a similar protest in March against the Maharashtra government's failure to fulfill its promises. The BJP-led Maharashtra government had then bowed to their demands, including their right to till forest land, leading the cultivators to call off their stir.

But soon, national capital Delhi was witness to similar movement by farmers. In October, agitating farmers of the Kisan Kranti Yatra were welcomed with teargas and water cannons by the Delhi police to supress the protest. They ended their protest a day later after announcing that the Narendra Modi-government had met “most” of their demands, including the need to increase the price of crops.