Rajesh, Tapas died in a clash between protesters and police at a school in Islampur 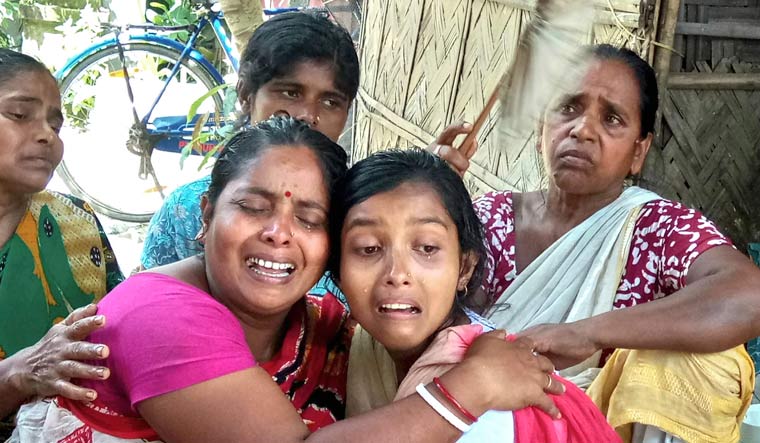 Family members mourn the death of Rajesh Sarkar at their residence near Islampur, in North Dinajpur | PTI

The BJP and RSS have jointly called for a dawn-to-dusk hartal in West Bengal on September 26, protesting against the deaths of two students, who were ABVP members, at Islampur in North Dinajpur district.

Rajesh Sarkar and Tapas Barman, who studied in a technical college in North Dinajpur, were part of a protest at a school in Islampur. The school authorities wanted to recruit Urdu teachers while the posts of Mathematics, Physics and Biology teachers were lying vacant for months.

Interestingly, Rajesh and Tapas had passed out from the same school—Daribhit High School—where they were protesting on September 20.

The school managing committee had decided recently that an Urdu teacher would be recruited, as there were several students willing to study the subject. When the two newly recruited Urdu teachers arrived on the campus with police escort, a clash ensued between the school authorities and the protesting students. A huge police contingent soon arrived at the spot and, allegedly, fired at the protesters to control the violence, in which Rajesh and Tapas were injured.

Both of them succumbed to injuries in the hospital. While police denied that the duo died because of police firing, the locals and their family said the police fired on the students from close range.

Tapas's family even alleged that their son was not admitted to the local hospital and lay unattended for hours.

The BJP and RSS launched a major protest in the area.

West Bengal BJP president Dilip Ghosh said, "It's a clear appeasement policy by the state government. They are not providing teachers for important subjects but are eager to recruit an Urdu teacher. This is appeasement at the highest level."

The BJP said the deceased were members of the ABVP and not the RSS or the party. The RSS has threatened to launch massive protests against the state government.

State education minister Partha Chatterjee said an inquiry has been ordered into the incident.

"Policemen would be punished if found guilty," he said.

However, Chief Minister Mamata Banerjee, who is in Italy for a business meet, issued a statement saying she has ordered the police to thwart the hartal.

"I have asked the administration not to allow any bandh in Bengal," said Banerjee in the statement.

The chief minister will return on September 28. Banerjee said the initial report suggests that the RSS hooligans fired at the students.

"BJP is creating problems across India to hide their failure on demonetisation and Rafale deal," Banerjee has been quoted as saying.

Tension has engulfed the Daribhit village, with villagers not allowing the bodies to be cremated and, instead, buried them.

They have demanded a CBI inquiry into the deaths of the youths and said they would hand over the bodies to the CBI officers for proper investigation. The families did not accept the postmortem report.

Under pressure, the school authorities have now agreed to recruit Sanskrit teachers along with Urdu teachers.