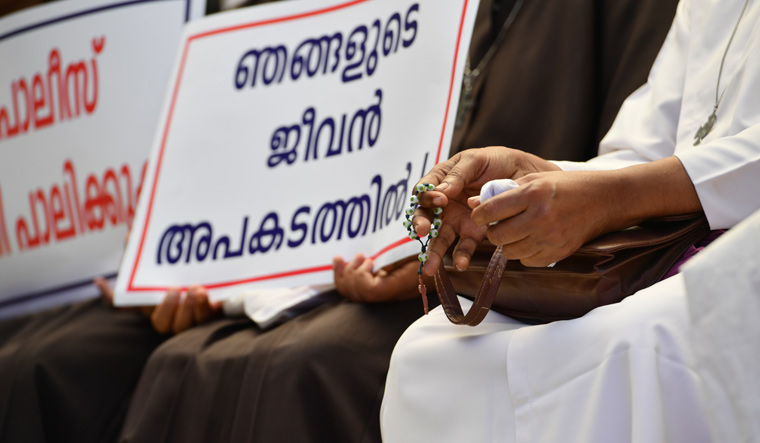 Meanwhile, with pressure mounting from the public for the delay in taking action against Jalandhar bishop Franco Mulakkal, the police has hinted that the accused bishop might be summoned for questioning this week itself. The police said there were a 'lot of contradictions' in the statements given by the victim nun, witnesses and bishop Mulakkal. A decision on further action would be taken after clearing all the doubts, the cops revealed.

“The bishop may be summoned to Kerala for interrogation,” a senior police officer said.
Bishop Franco Mulakkal has been accused of rape and unnatural sex with the complainant multiple times between 2014 and 2016.

Meanwhile, the officer, who did not wish to be named, rejected the charges leveled by the protesters seeking justice for the nun that police were helping the bishop. "A free and fair probe is on," he said.

Former vigilance director Jacob Thomas extended support to the rape-victim nun and said that sexually exploiting a nun in a convent is as despicable as custodial torture. “Nuns virtually lead a life of penance by obeying orders of their superiors. Attacking somebody who is lodged in a lock-up is the worst form of violence because the victim is totally helpless. Harassing a nun in a convent is no different,” said Jacob Thomas during a press conference in Thiruvananthapuram on Monday.

'Nexus between bishop and police'

Former high court judge B. Kemal Pasha has alleged that the Jalandhar bishop and the police have entered into an unholy alliance, which is preventing his arrest in the case. Demanding immediate arrest and medical examination of the bishop, Kemal Pasha said: “The DGP had announced that the probe was in the final stage; but even then the arrest did not take place. This is unheard of.”