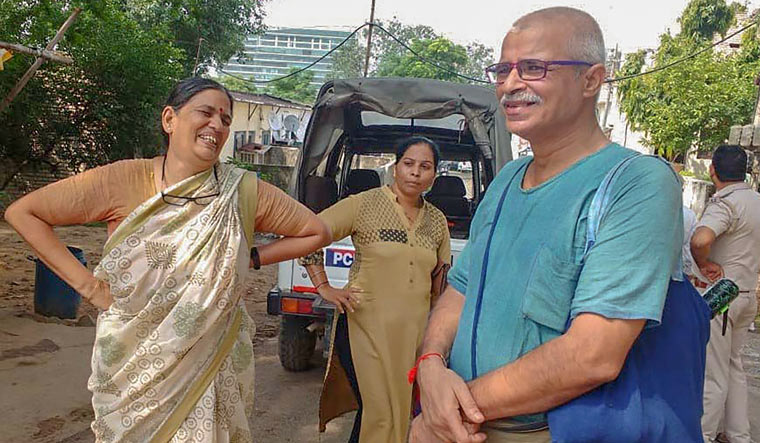 Sudha Bharadwaj (left) after her arrest in Faridabad | PTI

When all civil society and labour organisations of Chhattisgarh gathered in front of Burha Talab lake in Raipur last Sunday to protest against the arrests of five human rights activists, Rajeshwari had especially come from Ambikapur, 380km from Raipur, to express solidarity against the arrest of Sudha Bharadwaj.

Bharadwaj, who was arrested by the Pune Police on charges of having links with Maoists, has been considered as the pivot of civil society in Chhattisgarh. Chhattisgarh has one of the worst human rights records in India and has seen huge displacement of Adivasis due to exploitation of natural resources by corporates.

Since 2016, Bharadwaj has been fighting a legal battle for the villagers of Ghatbarra and adjacent areas in Ambikapur. The Chhattisgarh government had summarily cancelled the community rights of Adivasis living in the area. Rajeshwari is an Adivasi from the same region. The forest rights of Adivasi dwellers were taken away by the state government to facilitate coal mining for the Adani Group in the Parsa East and Kete Besan coal block.

The block was originally allocated to Rajasthan Vidyut Utpadan Nigam Limited (RVUNL), a Rajasthan government subsidiary. The Rajasthan government gave the rights of coal mining to Adani Minerals Private Limited. The Adani-operated Parsa East and Kanta Basan open cast is being developed at a cost of Rs 2,369 crore. The mines are likely to adversely impact 1,871 hectares of forest land and an elephant corridor in Sarguja.

Bharadwaj through Janhit—a lawyers collective that fights cases pro bono, especially for workers—is fighting on behalf of the Adivasis of Ambikapur in the High Court of Chhattisgarh at Bilaspur. The PIL on the issue is considered to be a major threat to the coal mining interests of the Adani Group.

Almost every second case Bharadwaj fought in the High Court of Chhattisgarh was against some corporate house. She stood with those marginalised communities for whom she fought on the ground between 1986 to 2006 as an activist. Bharadwaj has been a deterrent against powerful lobbies standing in their way to exploit Adivasi habitats.

Bharadwaj, 59, was born in the US, but renounced American citizenship when she turned 19. She is an IIT Kanpur alumnus. With her early schooling in Cambridge, UK, Bharadwaj was born in a family of academics. Leaving her teaching job in DPS, New Delhi, Bharadwaj came to Chhattisgarh in 1986 to work with legendary labour leader Shankar Guha Niyogi, who was murdered at the behest of a local industrialist.

Niyogi ran a movement of labourers in Chhattisgarh, which was called Chhattisgarh Mukti Morcha (CMM). The work of CMM and Niyogi was legendary during Niyogi's lifetime, but the movement shattered after his death.

It was Bharadwaj who continued to work in the set-up of a splintered CMM and cobbled together the activists of various factions without becoming its official leader. She moved to Jamul labour camp during the years of the Bhilai Andolan as part of the Chhattisgarh Mukti Morcha. Bharadwaj lived and worked among the workers of Bhilai for over a decade.

Kaladas Dehariya says, “We people who were dedicated to the cause of labour and the poor joined together to form Chhattisgarh Mukti Morcha Mazdoor Karyakarta Committee.” Dehariya has been associated with Bharadwaj for last two decades. He says, “The vacuum of Niyogiji was very well-filled by Sudhaji, who became an advocate for us to fight our cases in courts. She never takes decisions alone and instead has formed a committee for all decision making.’’

Surendra Mohanty, a labour leader of Bhilai Steel Plant, says, “She has taken forward the fight very systematically. When she saw that the struggle on the ground was lost in court battles, she decided to study law from a local college and became an advocate.”

In 2005, Bharadwaj started practising in High Court of Chhattisgarh, where her fights against corporate groups like Jindal, Birla, Adani and Vedanta became iconic in the pro-people struggle. There, she formed Janhit, a lawyers group to fight the pro-people cases in courts.

Shishir Dixit, an advocate working with Janhit, says, “Why name only corporates? We have fought for journalists who were harassed by the state and many more such marginalised people for whom reaching the High Court is a distant reality.’’ He told THE WEEK, “Sudhaji always insisted that fighting for the community will benefit individuals; that is why most of the petitioners whose cases we are fighting are in groups.”

He says “Sudhaji believes in a parallel fight on ground and in courts; then only, we can get relief for the poor and marginalised.’’ Even the draft proposal for the act for protection of journalists for Chhattisgarh was prepared by Bharadwaj.

Ashish Beck, another young advocate with Janhit, says, “We have filed nearly three dozen PILs in High Courts; most of them relate to oppression by state, failure of government services, land acquisition, forest rights, education and labour distress.’’

Admiration for Bharadwaj among legal luminaries and top High Court judges has been such that she was even offered judgeship in the state High Court by a chief justice few years back.

Owing to Bharadwaj's standing in the legal profession, the National Law University appointed her as a visiting faculty. She also served as member of the Chhattisgarh state legal services authority and holds the post of vice president of the Indian Association for People's Lawyers (IAPL).

When Bharadwaj was arrested from her rented home in Sector-29 of Faridabad, she was getting ready to go to college. When police took away her laptop and mobile phone and produced them before court, she told mediapersons, “Everybody knows about my credentials. I am a public figure for last 30 years. I have nothing to do with the incident in the FIR. My email password and Twitter passwords have been taken. I don’t know what they are going to do with it. It is data on air that you cannot seal by sticking a sellotape.’’

Before five prominent intellectuals went to the Supreme Court, Bharadwaj's case was taken up by eminent lawyer Vrinda Grover. On August 28, when the Pune Police raided her house, she was charged under provisions of the Unlawful Activities Prevention Act (UAPA) and Sections 153A, 505(1)(b), 117, 120(b) and 34 of the Indian Penal Code.

Ajay T.G., a film-maker in Bhilai, says, “The most burning issue that is agitating the farmers and Adivasis in Chhattisgarh is their displacement for mining and setting up of industries, dams, sanctuaries and four-laning of highways and setting up new towns.’’

The sponge-iron belt of Raipur, the cement belt between Raipur and Bilaspur, the coal mines of Koriya, bauxite mines of Sarguja, the power plants of Korba and industries of the Jindal Group of Raigarh have witnessed large-scale displacement and destruction of environment. Incidentally, footprints of Bharadwaj or her team can be witnessed everywhere. The 34 power plants coming up in Jangjir district and seven cement plants in the district of Baloda Bazar were questioned by her.

Nilabh Dubey, a young commercial tax lawyer, says, “She has indelible faith in the Indian system despite that system often failing to deliver for the marginalised and poor. Her understanding of Indian Constitution is incredible.’’

Shreya K., who works as a teacher in a school for children of labourers in an industrial area of Raipur, is a close associate of Bharadwaj. She says, “Sudhaji would always say she originally came to Chhattisgarh and to the sangathan (organisation) with the intention of teaching at the worker-run schools in Dalli Rajhara, but that all the Sangathan leaders and labourers convinced her to study law and fight their cases instead—that is what they needed.”

“She would enviously, yet lovingly, say 'now you’re getting to do what I set out to'. But somehow, there was never a hint of condescension or anything patronising about her tone. On the contrary, even when we looked to her as a senior mentor and guide, Sudha is someone who would somehow always make sure we walked beside her, and never behind,” reveals Shreya.

Rajendra Sail, the former president of PUCL in Chhattisgarh, says, “The arrest of human rights activists has not served any purpose of the government. In fact, we have won the first round as this has given us an opportunity to unite. The civil society movement needed this moment and Sudha Bharadwaj's arrest has given that chance.”

He says, “Though 2019 is a not a reference point for us, we must take this fight forward.’’