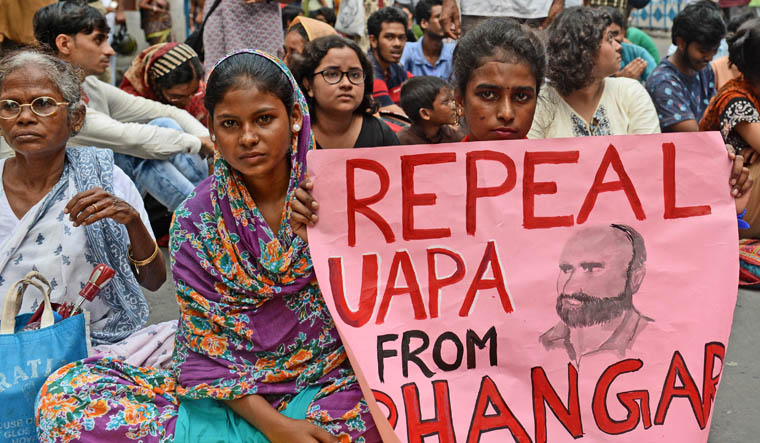 A protest rally against the arrest of Alik Chakraborty, the man behind Bhangar agitations, in Kolkata | Salil Bera

The West Bengal government has entered into a deal of Rs 12 crore with the villagers of Bhangar, which was under the siege of Naxalites, to resume the power grid project of the Narendra Modi government. Twelve villages of Bhangar used to be a liberated zone as entry of government officials as well as unknown persons was restricted into several villages surrounding the power grid project.

Sources have confirmed the decision was taken after active persuasion by Prime Minister Narendra Modi himself, who asked power minister R.K. Singh to step in and resolve the issue taking West Bengal government into confidence.

Singh spoke to West Bengal government and asked it to resolve the issue at any cost.

The deal was signed between district collector of South 24 Parganas, which includes the area of Bhangar, and the 'Save Farmland, Save Environment' committee.

Y. Ratnakar Rao, the collector, said that the project will continue with compensation to be paid to villagers, who died or were injured, during the clashes.

"More compensation would be paid to villagers who donated land for the high-powered grid substation," said Rao.

It was, however, not known whether this extra cost would be part of the project's budget or not. No official was available to confirm this .

The project was halted by the villagers, supported by a Naxalite group, alleging that the project would be bad for the environment and for the health of pregnant women, children and older people. The gas emission, due to the project, would lead to brain and spinal disease, alleged the CPI(M) Red Star, which was leading the movement.

But, the leader of the movement, Alik Chakraborty, was arrested from Odisha which led to the beginning of a negotiation.

Interestingly, Chakraborty was slapped with a UAPA (Unlawful Activities Prevention Act) case but received bail from a lower court. This was not opposed by the state government. Days after his release on bail, the negotiation began.

"But after bargaining, the amount came down to Rs 12 crore. Three died in police firing. Kin of each deceased will get around Rs 10 lakh each. Money would be given to injured and to people whose houses or shops were damaged. Plus the people who donated land also would get money," said Mosharaf.

The money would be distributed by the district collector and a list is being done by the office of collector in consultation with the village committee member.

"In fact, the project would help Kolkata and adjoining area in increasing voltage," said the officer.

CPI (ML) Red Star was tight-lipped when asked about what changed in the situation to have caused agreement to such a deal.

"Please don't ask me. Villagers are dealing with it. I have no role to play," said K.N. Ramchandran, general secretary CPI(ML) Red Star said

The villagers have been assured by the government that all criminal cases would be withdrawn from them.

"Once it's done, we will withdraw the embargo of police's entry into the villages. It will made free for all then," said Mosharaf.