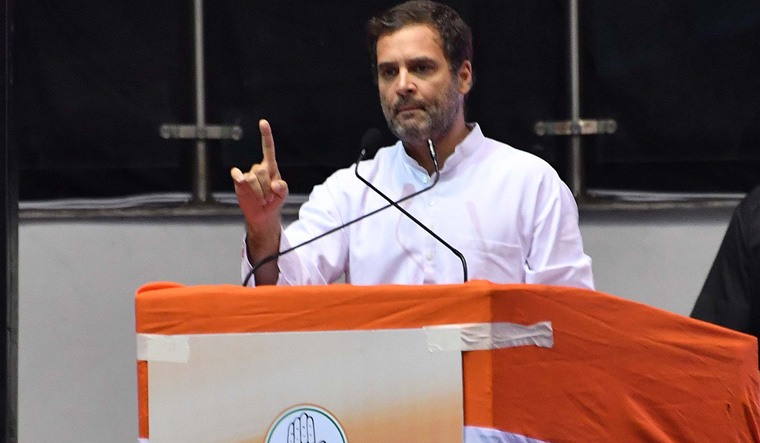 Aiming to corner the Narendra Modi government on the issue of reservation for women in Parliament and state assemblies, Congress president Rahul Gandhi on Tuesday promised that his party will pass the Women's Reservation Bill if it comes to power.

“The Women's Reservation Bill is languishing in Parliament. The Congress party has already told Modiji that he has our full support if he wants to pass the bill today. But the prime minister does not say a word (on it),” Rahul Gandhi said while addressing the mahila adhikar sammelan organised by All India Mahila Congress, the women's wing of the party.

The Congress chief further said if the Modi government fails to pass the bill, which provides for 33 per cent reservation for women in Parliament and Vidhan Sabhas, the Congress will pass it if it comes to power.

Rahul Gandhi had earlier written to PM Modi, urging him to pass the bill in the monsoon session. This was seen as the Congress' counter to the Modi government's attacks on the opposition for their lack of support to the Triple Talaq Bill.

The Congress president said he wanted more women in leadership positions at every level, and assured that when it comes to giving them a chance to contest elections, if he had to choose between a man and a woman who were equally capable, he would choose the woman.

In an indication of what will be the party's line of attack on the BJP vis-a-vis women's issues, Rahul Gandhi said the RSS and the BJP believed that only men should run the country. “Not one woman can enter the RSS, not today, never. This is their ideology. They believe that India should be run only by men,” he said, adding that this was the biggest difference between the RSS-BJP and the Congress.

Rahul Gandhi also attacked the Modi regime for being insensitive towards women's issues. “The prime minister speaks about bullet trains, aeroplanes, toilets, but not about women. Little girls are raped in Bihar, and the prime minister does not say a word,” he said. On the contrary, Rahul Gandhi claimed, the ruling dispensation protects wrongdoers.

The Congress president also unveiled a flag and a logo for Mahila Congress.