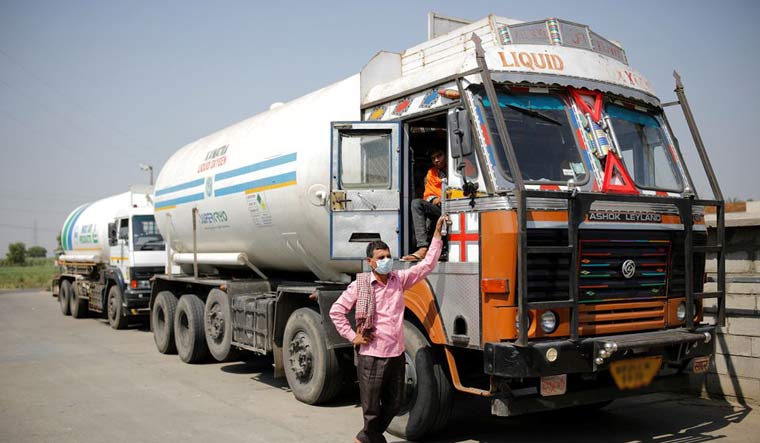 "Why do some truck drivers not use prescribed spectacles?" is one of the questions raised in the latest report "Eyes of the Highway" prepared by a Delhi-based NGO called Sightsavers India.

Among the reasons include discomfort around adjusting to new glasses. Or how the floating, migratory population of truck drivers do not appreciate or have little time for feedback calls from tele-callers while driving. Or they have either lost or misplaced or broken their glasses. They also do not have the opportunity or time to get it repaired or buy a new pair. Their perceived need for the glasses were questionable too.

Since 2017, the RAAHI initiative under Sightsavers has inspected some 5,40,000 truck-drivers for eye-related issues. Some 2,12,000 truck drivers were dispensed with glasses. These truckers mostly suffered from refractive error---a very common eye disorder progressing to degrees of blurred vision. That roughly amounts to 45 to 47 per cent drivers suffering from vision-related problems. Or nearly one in two truck drivers in India today will most likely need glasses.

"There are about 9 million truck drivers on Indian roads bringing us everything we need to our homes. We were shocked to discover that of the 9 million truck drivers, 50 per cent had vision problems. In 2017, Sightsavers started the RAAHI initiative to bring eye care to the truckers,” said Kabir Bedi, honorary brand ambassador of Sightsavers India—which recently commemorated the five year completion of RAAHI-National Truckers Eye Health Programme—in a press statement. RAAHI reaches out to truckers who need vision correction and ensure that they wear their glasses consistently and seek out eye examinations at least once a year. The programme has several static vision centres and outreach camps for truckers plying along the golden quadrilateral, north-south and east-west highways in India, across 54 cities in 16 states. Their services include vision screening, refraction, blood pressure checks, body weight measurement, cataract check-ups, eye-health counselling and referrals.

Some 90 per cent of the recipients have "self-declared" upon inquiry that they were wearing their glasses regularly.

There are no GPS trackers embedded in these glasses to ensure that they are actually wearing it, jokes Jatin Tiwari who is managing the Raahi programme. He has findings to report in the course of his fieldwork. "We can only work on improving their health-seeking behaviour. But how do you engage with a population that is always on the road? So as part of the program, we have created unique IDs for each of these truck drivers. And the model is such that they can get themselves examined in one location, pick up the glasses from another. If the glasses break, they can go to the third location to pick up a new one and do a follow-up treatment in the fourth location," says Tiwari, detailing the hub-and-spoke model of the programme with multiple touch-points.

But transforming the health-seeking mindset of the truckers is the biggest challenge that most NGOs working in the field have to grapple with. "A lot of the fleet owners, especially the small ones, are concerned that if their truckers start to wear glasses, then their vision will deteriorate further. And the same mindset exists among drivers as well. So the drivers do not want to wear glasses because they're scared that it will lead to a loss of livelihood," says Tiwari on how the drivers and owners of small fleet set-ups need more attention. "Secondly, some 75% of all truck drivers that walk in to our centers have never been to an eye-care centre before," adds Jatin, highlighting how most truck drivers tend to adapt to poor vision, reaching a point where they might be unable to drive. This again leads to a loss of livelihood, feeding into a vicious circle.

There are new insights on the states contributing to the trucking population today. "There was this whole perception that truck drivers come from well-off districts in Punjab. But that's no longer the case. Till the 1960s, when trucking was considered to be a respectable profession, they were coming from well off places like Punjab and Haryana, but today most truck drivers are coming from impoverished districts. The largest population of  truck drivers are coming from Bihar, Uttar Pradesh, parts of Andhra Pradesh, especially districts that are famine-hit," says Tiwari by outlining an example from Transport Nagar in Kolkata, where Raahi has a vision centre in Dhulagarh of Howrah district. "We found that 80 per cent of all truck drivers there were Telugu-speaking people. And the rest 20 per cent were from Bihar. There were no Bengali truck drivers."

Explaining the irony of trucking and road safety is another interesting find. "Something really fascinating from the data that we've captured is that less than 35 per cent of all truck drivers have life insurance. And less than 12 per cent have health insurance. While the vehicle is always 100 per cent insured."