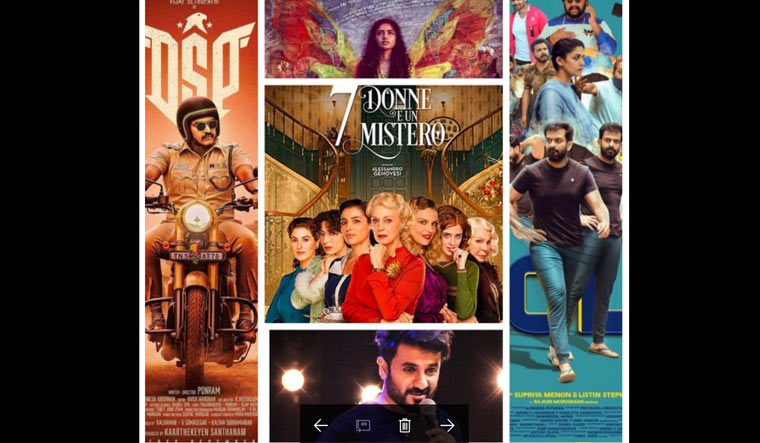 There is a host of movies and TV shows that are dropping on various OTT platforms for you to enjoy the year-end weekend, this week. From Alphonse Puthren's Gold, stand-up comedy special Vir Das: Landing to the Italian thriller movie 7 Women and a Murder, the week has plenty of entertainment options to offer for those looking to have a laid-back weekend at home.

The Tamil language action comedy drama, starring Vijay Sethupathi in the lead, was released on December 2. Directed by Ponram, DSP is a 'mass; cop drama in which Sethupathi's honest cop, strangely named, Vascodagama is up against a dreaded goon Mutta Ravi. If you are in the mood for a mindless entertainer, DSP would be the right pick.

Starring Prithviraj Sukumaran and Nayanthara in the lead, Mollywood director Alphonse Puthren's Gold is a comedy-drama with plenty of laughs. Gold revolves around Prithviraj's Joshey, a mobile shop owner who spots a Bolero parked outside his home and the attempts of a few goons to get rid of the vehicle. The movie was highly anticipated when it hit theatres as it came after a long gap following Puthren's sleeper hit Premam.

The second season of the Turkish historical docudrama chronicles the struggles of Sultan Mehmed II against a tyrannical ruler in Wallachia, Vlad Dracula, two years after the former conquered Constantinople. The second season promises plenty of chaotic violence and drama if the trailer that was dropped recently is anything to go by. The six-episode first season of the docudarma, which was released in 2020, was among the best Netflix documentaries to watch that year.

7 Women And A Murder: Netflix

When their family patriarch is stabbed, seven women, each with ulterior motives, become trapped together in a mansion to solve the puzzle of his murder, reads the synopsis of this Italian movie set in Italy in the 1930s. The movie promises plenty of twists, turns, and intrigue and is sure to satisfy thriller genre enthusiasts.

Stand-up comic Vir Da's special, according to him, deals with freedom, foolishness, and being a global citizen. The 66-minute act is the fifth collaboration between Netflix and the comic. There are plenty of clever political jokes, evoking both thoughts and laughter. If you are in the mood for some stand-up comedy but don't feel like getting out, this one could be the right pick for you.

Starring Sumeet Vyas, Patralekhaa, Ashish Vidyarthi, and Aditya Rawal in the lead, this Disney+ Hotstar original is a thriller series directed by Glen Baretto, Ankush Mohla, and Neel Guha. If the trailer of the show is anything to go by, you are sure to have plenty of action and suspense in Aar Ya Paar.