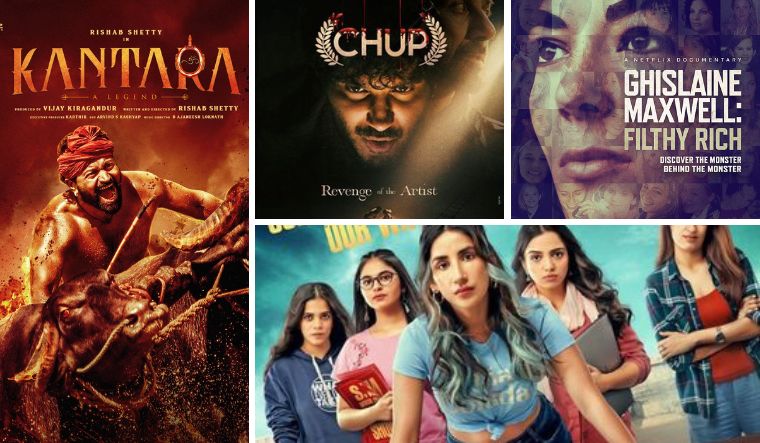 As we head towards the end of November, there is a long lineup of exciting releases on streaming platforms. Quite a few films which hit the big screens recently, arrive on OTT platforms, along with fresh seasons of shows.

Let us take a quick look at what to binge on Netflix, Amazon Prime Video, Disney Plus Hotstar and other platforms this week.

The Kannada film received rave reviews after its theatrical release in Hindi and other south Indian languages recently. Written, directed and fronted by Rishab Shetty, the period action thriller is set in a fictional village of Dakshina Kannada. Kantara follows a Kambala champion who comes to loggerheads with a forest range officer. The film was praised for its stunning visuals that captured the culture and rituals of coastal Karnataka.

Chup: Revenge of the Artist: ZEE5

The political drama, starring Nivin Pauly in the lead, also released in theatres recently. Directed by Liju Krishna, the film revolves around the struggles of an oppressed section of society and their fight for justice. Set in a village in north Kerala, the film also features Aditi Balan of Aruvi fame.

The Telugu-Tamil romantic comedy revolves around a teacher essayed by Sivakarthikeyan, who falls in love with a British woman. The film directed by Anudeep Kv also features Maria Ryaboshapka and Sathyaraj.

The documentary focuses on former British socialite Ghislaine Maxwell who was sentenced to 20 years in prison on counts of sex trafficking. Maxwell who was Jeffrey Epstein's accomplice was convicted for recruiting and grooming minor girls to participate in illegal sexual acts.

The Gujarati film is India's official entry to the 95th Academy Awards. The semi-biographical coming-of-age drama, written and directed by Pan Nalin, follows nine-year-old cinema lover Samay. The film will also be available to watch with Hindi dubbing on the streamer.

The show about a bunch of girls, their relationships and their struggles to build a life of their own, was received well by the audience, and it is set to be back with an exciting season. With more twists and drama, the third season will feature Ahsaas Channa, Srishti Shrivastava, Simran Natekar and Parul Gulati.

The Telugu anthology series revolves around five lead characters, their accidental meetups and relationships. Produced by Nani, and directed by Deepthi Gant, the anthology features actors like Satyaraj, Rojini Molleti, Dikshit Shetty. Akansha Singh among others.