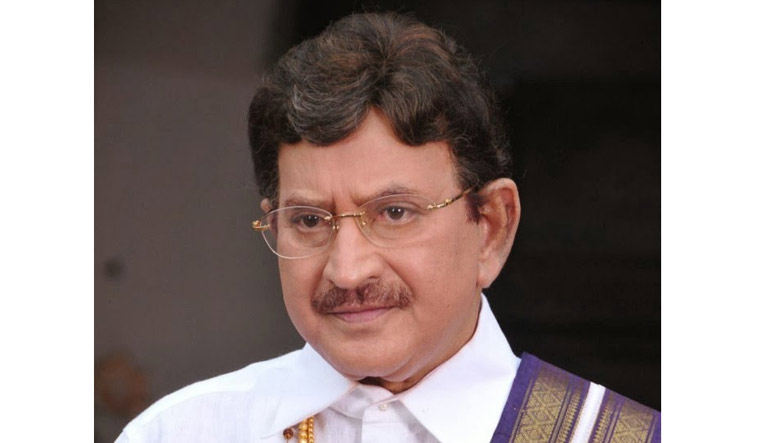 There are many firsts to Ghattamaneni Krishna. Five decades back, a Telugu cowboy was born in Padmalaya studios who went on a wild ride in the foreign lands alluring French, Spanish, Russian and English speakers. The movie was Mosagallaki Mosagadu, made on the lines of American cowboy movies like The Good, the Bad and the Ugly. It was a quite a unique feat in the early 1970s to present a lead character on a horse, cowboy hat, boots and a gun with a Telugu narration and a localised plot. The movie was a smashing hit and it was screened in more 100 countries and dubbed in multiple Indian and foreign languages. This movie laid a strong foundation to Krishna’s cine factory, Padmalaya Studios, which went on to churn out many Telugu and Hindi hits.

On Wednesday, VIPs and fans alike thronged the same studio located in the plush Jubilee Hills area paying homage to the legacy of Krishna before the commencement of his funeral.

Never afraid to explore the unbeaten path, Krishna continued the trend of cowboy films and became a household name in that genre. There is another category of films that Krishna aced and owned. His spy thriller, Gudachari 116, made with rich production values in the late 1960s and rivalling the James Bond 007 brand, became a blockbuster with its slick posters and opened gates for more such movies.

In a career spanning more than five decades and 350 movies, Krishna is credited with acting in the first 70 mm Telugu movie, Simhasanam (1986) and first colour movie with social theme, Thene Manasulu (1965), which also happened to be his debut film in a lead role. Telugu Veera Levara (1995) was his 300th movie and the first Telugu film made with DTS technology. His biggest milestone was the first cinema scope movie, Alluri Sitharama Raju (1974), which was a huge success starring Krishna in the titular role as the freedom fighter from Andhra’s eastern ghats who mobilised and motivated the tribals to fight against the British empire. The movie is remembered as a classic among the vast collection of Telugu films and one of the best in Krishna’s career. He paired up with late Vijaya Nirmala in the movie, his wife with who he acted in more than 40 movies. Also, Jayaprada was another actress with who he shared the scene in more than 40 films. Later on, he acted with younger generation stars like Sridevi.

Born in Burripalem village in Guntur district, Krishna was always rooted to his past. In the early years, he acted in Burripalem Bullodu (1979) which also had the title song introducing his village. In his later years, he continued to take up developmental works in his village constructing a school and contributing to local charitable causes. He also made occasional trips to his house and met the locals and his fans.

At a time when the Telugu film industry was being ruled by matinee icons, N.T. Rama Rao and Akkineni Nageshwar Rao, Krishna burst on to the scene like a whiff of fresh air. He went on to create space for himself and amass fans. He made sure that he reinvented himself with time and stayed relevant.

Known to be soft spoken and a thorough gentleman, Krishna dabbled in politics. When NTR’s TDP was holding sway among the Telugu film fans with support from the film industry in the early 1980s, Krishna swam against the tide and joined the Congress, impressed by Rajiv Gandhi’s work. He contested and won, and became an MP from Eluru. But, he lost in the subsequent elections and bid goodbye to politics. In the 90s, Krishna continued to play entertaining roles in colourful attires in films mostly produced by the home banner.

Krishna is survived by another star, Mahesh Babu, who is among the leading actors in Telugu cinema now. The Ghattamaneni family had to experience multiple tragedies in the last one year due to the deaths of Krishna, his first wife, Indira and elder son Ramesh Babu.