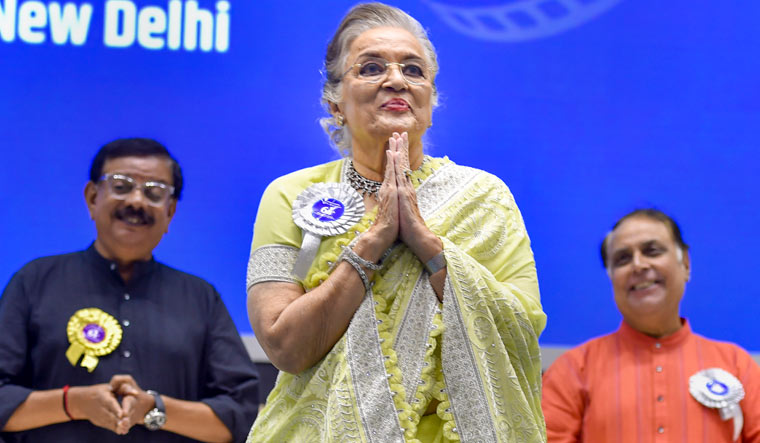 Veteran actor Asha Parekh was, on Friday, honoured with the Dada Saheb Phalke award, the highest recognition in the field of Indian cinema.

Parekh, 79, was presented the award by President Droupadi Murmu during the 68th National Film Awards ceremony, held at Vigyan Bhawan in Mumbai.

The veteran said she is grateful to receive the prestigious award a day before her 80th birthday.

"It is a huge honour to have received the Dada Saheb Phalke award. It makes me very grateful that the recognition comes to me just one day before my 80th birthday. This is the best honour I could get from the government of India. I would like to thank the jury for the recognition that they have bestowed upon me, my long journey and fulfilling the journey in the film industry," said Parekh, who is the recipient of the award for the year 2020.

Describing the Indian film industry as the "best place" to be in, the actor said she continues to be attached to the movies in her own small way even after 60 years.

"Our film industry is the best place to be in. And I would like to suggest to the youngsters who are in this industry to have perseverance, determination, discipline, and to be grounded, and I congratulate all the awardees tonight," she said.

Congratulating the cinema icon, the president said the award for Parekh is also an honour for the "indomitable female power".

"I congratulate all the winners at the 68th National Film Awards. I offer my special congratulations to Asha Parekh ji, the recipient of the Dada Saheb Phalke award. Our sisters of her generation made their mark in various fields despite many constraints. Honour to Ms Parekh is also an honour for the indomitable female power," Murmu said.

"Devika Rani ji was the first winner of the Dada Saheb Phalke award in 1969. And today it is being awarded to Asha Parekh, an actress who entertained not just Indian but global audience for decades. She took Indian culture to the corners of the world. Asha ji, you motivated so many women to step forward and participate in cinema and other various fields," the Union minister said.

Parekh, whose stardom was at par with male contemporaries Rajesh Khanna, Rajendra Kumar, Dharmendra and Manoj Kumar in the 1960s-1970s, started her acting career at the age of 10 with the 1952 film Aasmaan.

In a career spanning over five decades, she starred in over 95 films that include titles such as Dil Deke Dekho, Kati Patang, Teesri Manzil, Baharon Ke Sapne, Pyar Ka Mausam, and Caravan.

She made a foray into films as a child artist with 1952's Aasmaan and went on to star in Bimal Roy's Baap Beti two years later.

Parekh made her debut as a leading lady in Nasir Hussain's 1959 movie Dil Deke Dekho, opposite Shammi Kapoor.

A director and producer as well, Parekh had helmed the acclaimed TV drama Kora Kagaz that aired in the late 1990s.

The screen legend was also the first female chairperson of the Central Board of Film Certification (CBFC). She served from 1998-2001.

The actor came out with her autobiography, The Hit Girl, co-written by film critic Khalid Mohamed, in 2017.

She was also honoured with the Padma Shri, the fourth-highest civilian award of the country, in 1992.

Last year, the Dadasaheb Phalke Award for 2019 was conferred on Rajinikanth.