The Lord of the Rings, Cuttputlli, Fabulous Lives of Bollywood Wives: OTT releases this week 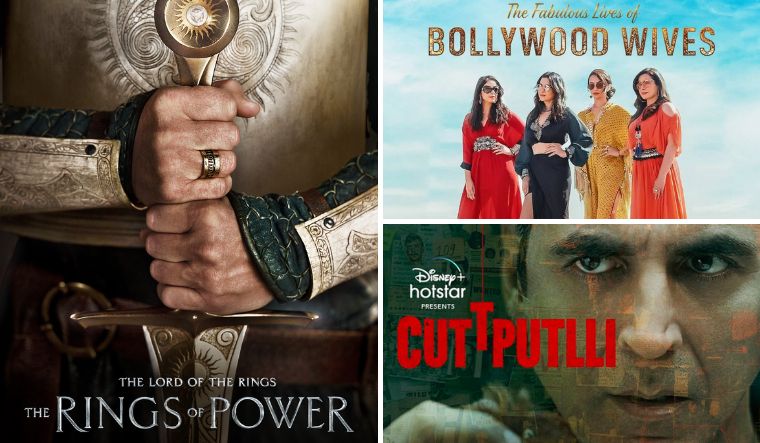 This week brings yet another lineup of much-awaited releases on streaming platforms.  The biggest release is Amazon Prime Video’s series The Lord of the Rings. Here is a quick look at the movies and shows arriving on Netflix, Amazon Prime, Disney plus Hotstar and other platforms.

The multilingual film headlined by Kiccha Sudeep had released in theatres in July. The 3D fantasy action-adventure film is directed by Anup Bhandari. It also stars Nirup Bhandari, Neetha Ashok, and Jacqueline Fernandez.

The reality series that follows the lives of celebrity wives returns for a second season. The popular show features Maheep Kapoor (wife of Sanjay Kapoor), Bhavana Pandey (wife of Chunky Panday), Seema Kiran Sajdeh (former wife of Sohail Khan) and Neelam Kothari (wife of Samir Soni). The second chapter of the show will be larger and louder, Netflix had said in a statement.

The Lord of the Rings: The Rings of Power: Amazon Prime Video

One of the most anticipated releases this week, the series is set thousands of years before JRR Tolkien’s The Hobbit and The Lord of the Rings. The Rings of Power takes place during the Second Age of Middle Earth, which covers the rise and fall of Numenor, the creation of the titular rings and the formation of the Last Alliance. The show will introduce new characters as well as bring back some familiar names. The show will feature an ensemble cast of Morfydd Clark, Robert Aramayo, Cynthia Addai-Robinson, Owain Arthur, Nazanin Boniadi, Morfydd Clark, Ismael Cruz Córdova, Charles Edwards, Trystan Gravelle, Sir Lenny Henry, Ema Horvath, Markella Kavenagh and Joseph Mawle.

The Tamil children’s fantasy drama will see Prabhudeva play a genie and his adventures with a young boy who discovers him. The film directed by Ragavan also features Remya Nambeesan.

The Korean adaptation of Louisa May Alcott’s novel Little Women follows three sisters of the Oh family who struggle with poverty. Things take a turn when they are caught up in a case involving the country’s richest family. Directed by Kim Hee-won, the series stars Kim Go-eun, Nam Ji-hyun, Park Ji-hu and Wi Ha-joon.