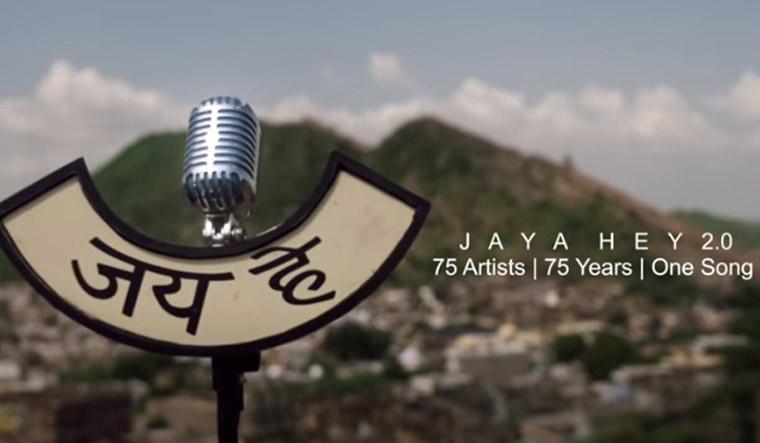 Ace industrialist Harshavardhan Neotia, chairman of the Ambuja Neotia group, has come up with a musical tribute, involving 75 ace Indian singers and artistes to commemorate the 75th Independence Day.

The music is composed and directed by Sourendro Mullick and Soumyojit Das, the musical pair known as Sourendro-Soumyojit, who also impressed Prime Minister Narendra Modi last year during the 125th birth anniversary of Subhash Chandra Bose.

According to Neotia, the music composition is known as Jaya Hey 2.0 and is a rendition of full 5 verses of “Bharat Bhagya Vidhata as known as Jana Gana Mana, our national anthem”.

The song Bharat Bhagya Vidhata was written by Rabindranath Tagore in 1911 and had five stanzas. However, only the first stanza was adopted as our National Anthem in the 1950s, to keep the song’s duration within one minute.

“The essence of India as a nation lies in her plurality and unity in diversity. Many have sacrificed their lives to give us our freedom. It is essential that every individual of this county remembers that and collectively make a conscious effort to keep the essence alive,” said Neotia.

“As a group, we had earlier created a similar version of the complete song of Jana Gana Mana in collaboration with 39 performers. This year, paying tribute in reverence to the 75 years of Indian Independence, we have joined hands with 75 singers and musicians to seek inspiration in the words of Gurudev Rabindranath Tagore. Let us sing in unison and bow down before the souls who earned us our freedom. Personally for me, the verses fill me with immense pride for being an Indian and give me hope to overcome any obstacle that life throws at us,” he said.

“We are so happy to create this musical bouquet, a humble offering to the motherland from the artistes’ fraternity. The journey of putting it together was larger than life in its own way. We are thankful to the overwhelming support of Shri Harshavardhan Neotia who encouraged us to spread our wings and catch the infinite joy of achieving the unity of the diverse music, diverse belief, and the varied philosophies of India - draped in one anthem of togetherness,” said Sourendro and Soumyojit.