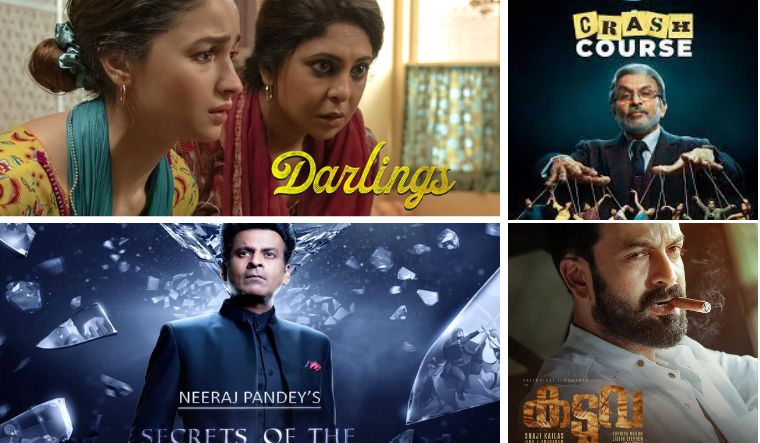 August is here, and we have a long list of interesting releases on streaming platforms this week. From movies to shows and docuseries, here is a quick list of what to watch on Netflix, Amazon Prime Video, Disney plus Hotstar and others this week.

The Prithviraj-starrer Malayalam action drama released in theatres in July. Directed by Shaji Kailas, the film set in the 90s revolves around a rubber planter who develops rivalry with a police officer. The film also features Samyuktha Menon and Bollywood actor Vivek Oberoi in prominent roles.

Alia Bhatt's maiden production venture, Darlings, is a dark comedy set in Mumbai. Starring Bhatt alonsgide Shefali Shah, Vijay Verma and Roshan Mathew, the film is directed by Jasmeet Reen. The film explores the lives of a mother-daughter duo trying to find their place in the city, seeking courage and love in exceptional circumstances. Darlings features music by Vishal Bhardwaj and lyrics from Gulzar. Bhatt has produced the film through her banner Eternal Sunshine Productions, in collaboration with Shah Rukh Khan's Red Chillies Entertainment.

Secrets of the Kohinoor: Discovery Plus

Actor Manoj Bajpayee turns narrator for the docu series that follows the journey of the infamous Kohinoor diamond—through the stories of multiple rulers and wars triggered by the desire for the diamond. The series is produced by Neeraj Pandey's Friday Storytellers and directed by Raghav Jairath. "Manoj's extraordinary storytelling expertise makes him the most suitable choice to narrate the journey of the infamous Kohinoor that most of us have heard about but have never been able to call our own. I am certain that this historical ride will fascinate viewers across the globe," Pandey had said.

In the animated action adventure, legendary space ranger Buzz Lightyear sets off on an intergalactic adventure Izzy, Mo, Darby, and his robot companion, Sox. The Pixar feature had released in theatres in June.

The 10-episode drama series delves into the lives of students preparing for competitive exams in the country. Headlined by veteran actor Annu Kapoor, the series revolves around two warring coaching institutes, and the effect it has on the students and their families who have put their hopes on them. "As the two drastically different worlds of the students and coaching institute owners collide, eight new students experience friendship, love, heartbreaks, peer pressure, and lose the innocence of youth as they are unwillingly pulled into the power-battle between the coaching institutes," the official synopsis read.

A science fiction film, Aavasavyuham, was adjudged the Best Film at the Kerala State Awards this year. Directed by Krishand, the film features Rahul Rajagopal, Zhinz Shan, Sreenath Babu among others.