Legend of Savitri Antharjanam, better known as Kuriyedathu Tatri, is an enduring one 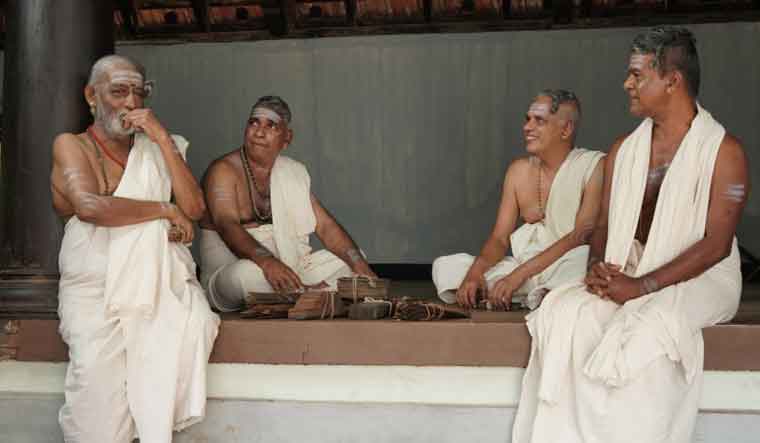 Smārthavichāram, a social trial practiced in late nineteenth and early twentieth century Kerala, heaped several oppressive ignominies on a Nambudiri woman. If found guilty of illicit sexual relations, the Nambudiri woman would be banished from her community along with her fellow male adulterers who instead found several loopholes to escape the regressive system.

In 1905, it took an upper caste Nambudiri Brahmin woman to rock the boat of this vicious patriarchal practice and expose the hypocrisy inherent in the system. The legend of Savitri Antharjanam, better known as Kuriyedathu Tatri, is an enduring one. She was tried for adultery by a kangaroo court of community elders and expelled. But with the right combination of cleverness and persistence, she achieved the expulsion of 60 other men in a smārthavichāram that went on for 40 days where she brought down prominent figures and religious leaders of upper caste families, deftly using proofs like a lover's gift and the recording of intimate physical details.

G. Prabha, filmmaker and professor, predicates his second Sanskrit feature film Taya on this episode, pulled from Kerala's history of social hierarchies. The use of Sanskrit to depict this chapter of social justice and gender reform, set in the confines of strict religious orders, serves the story and the circumstance well.

Shown at the Habitat International Film Festival in New Delhi on May 7, Taya's recreation of a famous incident which has several versions in cinema and short stories, found resonance with a contemporary audience. "Even today, majority of the members in Nambudiri clans are not willing to utter the name of Tatri. Only one Nambudiri, social reformer and freedom fighter V.T. Bhattathiripad wrote freely about her. My film is not a historical document. There are changes in narration which are apt for a cinematic approach. But I want the forthcoming generations to see this lady. They have to know about her legacy and what she did for the betterment of Nabudiri women," said Prabha during a Q&A session after the screening of the film at India Habitat Centre. "The film also reflects the current state of the judiciary where the truth can be kept away and only the proof will stay," said Prabha.

The Nambudiri community, in the period depicted in Taya, have customs where women are treated as objects of pleasure. Only the eldest son in the family can marry from within the community. Again, only he can inherit ancestral wealth. The other sons are allowed to have sexual relationships with women from other castes but these women are not allowed to be their legally wedded wives. The children born from these unions are not allowed to be touched by their fathers. The rule that only the first son can marry from the community has created a major social problem: a large number of Nambudiri girls cannot find suitable husbands. The patriarchy finds a solution for this by allowing the eldest son to take four or five wives. Thus old, infirm men marry girls as young as their grandchildren. Several such girls become widows before their marriages are consummated. And widow marriage is forbidden.

Ishti (2016), the last Sanskrit feature film by Prabha, was the opening film at the Indian Panorama section of IFFI (International Film Festival of India) in Goa. This film also dealt with unequal and orthodox property rights in Nambudiri Brahmin families. The controversy around the film had Brahmina Kshema Sabha file a case against the Censor Board and Prabha.

Ruing the dearth of screening options for Sanskrit films beyond the festival circuit, Prabha makes a case for better distribution. "Forget about taking it to the international markets like Germany or France, we are not getting a slot in Doordarshan itself. There are several Sanskrit films on YouTube. The government should give us a chance to show these films to the wider public. Hindi, Malayalam, Kanada, all have their respective states to screen the film. What state does Sanskrit have if not India?" asks Prabha, pointing out the irony of not being able to find enough places to show Sanskrit films at a time when there is a dedicated push to foreground the learning of the classical language. "I am only trying to bring out strong, social themes with my movies," says Prabha who teaches Sanskrit at Loyola College in Chennai.

Shot in Thrissur and Palakkad, Taya has so far been shown in Pune, Bengaluru, Nagpur and New Delhi.

Habitat International Film Festival is running till May 15 in New Delhi.