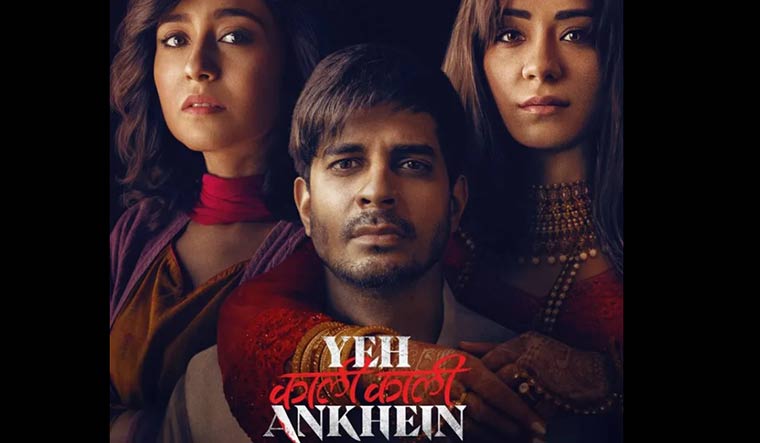 Falling under the genres of crime, romance and thriller, Netflix’s latest series Yeh Kaali Kaali Ankhein is directed by Sidharth Sengupta who is known for the popular Indian soap Balika Vadhu. He has returned with a well-crafted and brilliantly structured dark thriller, which he co-wrote with Anahata Menon and Varun Badola, after directing the gripping crime fiction Undekhi.

Yeh Kaali Kaali Ankhein  takes place in the fictionalised town of Onkara. Purva, portrayed by Anchal Singh, is the daughter of a powerful politician. She is a woman fuelled by a terrible desire and passion for Vikrant, played by Tahir Raj Bhasin, the man she loves. She is adamant about getting him, no matter what it takes. This desire triggers a cascade of crazy events in everyone’s life.

However, Vikrant does not want to pursue a life ahead of her. Engineering graduate Vikrant Singh Chauhan is eagerly awaiting a job offer. He fantasises about finding a basic job, purchasing a small house and car, and living a simple life with Shikha Aggarwal, his college-sweetheart played by Shweta Tripathi Sharma. Vikrant’s father is an accountant for Purva’s father and Purva has laid eyes on him since childhood. With her longing for him, his relationship with Shikha suffers.

The portrayal of the ruthless politician, Akheraj-- Purva’s dad, essayed by Saurabh Shukla--assures that you loathe him. He kills people without hesitation, and has no limitations when it comes to Purva, the apple of his eye. After witnessing a brutal murder by Purva’s brother and his group of goons, the protagonist Vikrant has no option but to comply. But the longer he stays with Purva, the more desperate he becomes to get away. As he plots his escape and avenges himself, his daily life becomes a cat and mouse game with bullets and knives.

With films and shows like Undekhi, Dhilluku Dhuddu, Zakhmi, and Sri Siddhartha Gautama, Anchal has captured our hearts in the past. The excellent actress portrays a heroine who is both gorgeous and fiery, with numerous shades of grey, in Yeh Kaali Kaali Ankhein. The fierceness in her character is seen in her eyes throughout the series. Tahir Raj Bhasin was last seen playing Sunil Gavaskar in the latest movie 83. He also had a brief role in Kai Po Che, Chhichhore among others. He has done an impressive job at being Vikrant. As he takes you through Vikrant's emotional journey from a simple boy to a committed lover yearning to marry the one that he truly loves, we feel for him and root for him.

The background scores set the intense mood throughout the series. The title track is a recreation of Shah Rukh Khan and Kajol’s hit song ‘Yeh Kaali Kaali Ankhein’ by Anu Malik and Dev Kohli.

Even though the actors have done justice to their roles, the story line does not do much justice to the audience. The lack of any major subplot that may have added complexity or provided a much-needed twist is a huge flaw. Halfway through the series, the whole 'trying to get away from the obsessive and possessive lover' scenario becomes monotonous. At times, even powerful dialogues fail to make basic sense in connection with the plot. The characters are not consistent throughout the series--their basic natures keep fluctuating from episode-to-episode. The whole series could have made better impact if it was shrunk into a two-to-three-hour movie.