Astroworld tragedy: A look at what happened, Travis Scott's history of chaotic concerts 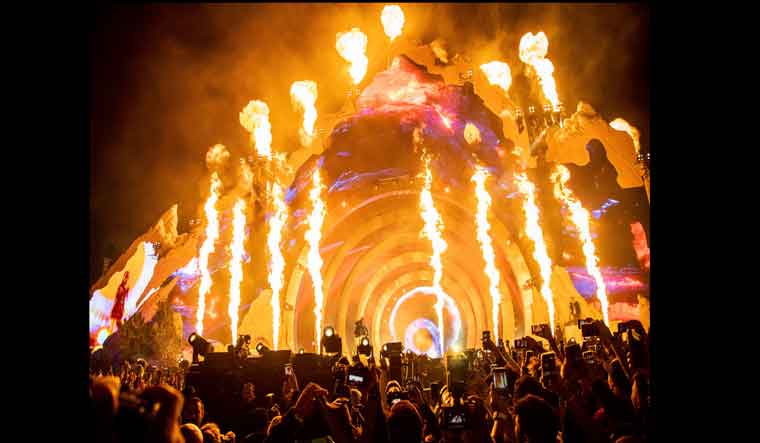 A 9-year-old boy, who was in a medically-induced coma after suffering serious injuries during the crowd surge at the Astroworld music festival, died on Sunday. The death toll now stands at 10, with several others hospitalised. Hundreds were injured at the tragedy that struck the sold-out concert headlined by rapper Travis Scott, on November 5 in Houston.

Scott and the organisers of Astroworld are now being sued in hundreds of lawsuits by families of victims and injured concert-goers.

What happened during the concert?

According to reports, cries for help were heard around 9:30pm when exuberant concert-goers began pushing to move forward during Scott's performance. Almost 50,000 people were present at the venue when the incident happened. Twenty five people were hospitalised and eight were confirmed dead on the spot.

It is considered one of the deadliest crowd-control disasters at a concert in the United States after the 1979 Who concert stampede that took 11 lives.

Madeline Eskins, an ICU nurse who was present at the festival said it started getting packed half an hour before the rapper's entry. But it soon became fierce when Scott started performing his first song.

Another concert-goer Alexis Guavin told CNN: “Luckily, I have mosh pit experience and am six feet tall so I could at least put my head up to breathe, but others [were] not so fortunate.”

It is still unclear what prompted the crowd to surge forward but Houston mayor-Sylvester Turner has vowed to uncover this. He said during a press briefing: “It is a very very active investigation, we will probably be at it for quite some time to determine what exactly happened.”

Who is to blame

Two videos that surfaced online showed two different crowd reactions. In the first clip, a girl goes up to the camera man who was livestreaming the event and yells at him to stop the show but the staff was seen driving her away. The second video that went viral was of a crowd that was unbothered about the emergency panic—they chose to dance over the ambulance and block the rescue operation.

Netizens say one proved that the authorities could have controlled the situation but chose to ignore it, whereas the other showed an unconcerned crowd not ready to choose a life over fun.

Some blame the rapper as he did not stop the concert even after observing the panic situation. In another video which went viral, the rapper was seen asking fans to raise their fingers only to see if they are fine when he spotted an ambulance in the crowd. The crowd responded positively and he reportedly resumed singing.

Just the day after the tragedy, Scott tweeted: “I’m absolutely devastated by what took place last night.My prayers go out to the families and all those impacted by what happened at Astroworld Festival. Houston PD has my total support as they continue to look into the tragic loss of life.”

Later, responding to the criticisms, he uploaded a video on Instagram where he said he was not aware of ‘the severity of the situation.’ If known he would have surely stopped the event and helped people, he said.

Scott’s girlfriend, Kylie Jenner who was also present during the concert with their three-year-old daughter, also said they were not aware of the gravity of the situation. She wrote: “I want to make it clear we weren’t aware of any fatalities until the news came out after the show and in no world would have continued filming or performing.”

Danish Baig, 27, the oldest among the victims who died while trying to protect his fiance

Rudy Peña, 23, a fan who travelled from Laredo

Franco Patiño, 21, a mechanical engineering student at the University of Dayton

Madison Dubiski, 23, a varsity cheerleader and a member of the national charity league

Bharti Shahani, 22, an Indian-origin student who attended the event with her sister and cousin

Ezra Blount, 9, the youngest victim who lost his life after days of being in a medically-induced coma

Scott, who is loved for his chaotic energy, has a history of being charged for disorderly conduct at his concerts. In 2015, he was arrested by the Chicago police for his reckless conduct. He urged fans to climb over security barricades and reach the stage. Similarly, in 2018 at a Rogers, Arkansas concert, local police had reported that he encouraged fans to reach onstage.

In 2017, Scott, who was performing in New York, encouraged a fan to jump off the second floor balcony. He said “I see you but are you gonna do it.'' At the same concert, Kyle Green, a fan, got paralysed after she was pushed off from a third floor balcony. She sued the rapper for his provokative statement.

In 2019, during the second Astroworld festival, hundreds of people rushed over metal barricades to break into the event. Three people were hospitalised with minor leg injuries.

Response of other celebrities

Drake, who made a surprise appearance at the Astroworld, also expressed regret. He wrote: “I will continue to pray for all of them, and will be of service in any way I can.”. He has also removed Instagram pictures of the event where he was seen performing with Scott.