The actor died after a battle with cancer 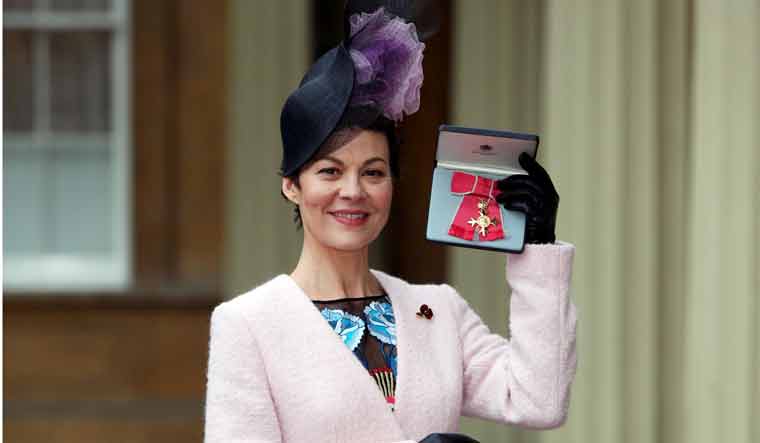 Helen McCrory poses after she was awarded an OBE by Britain's Queen Elizabeth at an Investiture ceremony at Buckingham Palace, London | Reuters

British actor Helen McCrory, best known to fans for her roles in popular Harry Potter franchise and TV show Peaky Blinders, has died at the age of 52 , her husband, actor Damian Lewis, confirmed on Twitter.

The actor died after a battle with cancer, Lewis revealed in a post on Friday.

"I'm heartbroken to announce that after a heroic battle with cancer, the beautiful and mighty Helen McCrory has died peacefully at home, surrounded by a wave of love from friends and family," he wrote.

"She died as she lived. Fearlessly. God we love her and know how lucky we are to have had her in our lives. She blazed so brightly. Go now, Little One, into the air, and thank you."

One of the most versatile and beloved stars in the film industry, McCrory leaves behind a great legacy of playing formidable women on stage, television and in films, including roles as recent as James Bond film "Skyfall" and aunt Polly Gray in the hit British TV series "Peaky Blinders".

Her most famous role globally, however, is as Narcissa Malfoy, the wife of Jason Isaac's Lucius Malfoy and the mother of Draco Malfoy.

"I am broken-hearted to lose such a dear friend. Helen was a beautiful, caring, funny, compassionate human being," Murphy said in a statement to Entertainment Weekly.

"She was also a gifted actor fearless and magnificent. She elevated and made humane every scene, every character she played. It was a privilege to have worked with this brilliant woman, to have shared so many laughs over the years. I will dearly miss my pal. My love and thoughts are with Damian and her family," he added.

Author J K Rowling also condoled McCrory's death on Twitter. "I'm devastated to learn of the death of Helen McCrory, an extraordinary actress and a wonderful woman who's left us far too soon. My deepest condolences to her family, especially her husband and children. Simply heartbreaking news," she said.

Harry Potter actor Chris Rankin, who played Percy Weasley, tweeted, "Awful news about Helen McCrory. A sublime talent, and, from the couple of brief moments our paths crossed whilst battling Hogwarts, a very lovely person. 52 is no age."