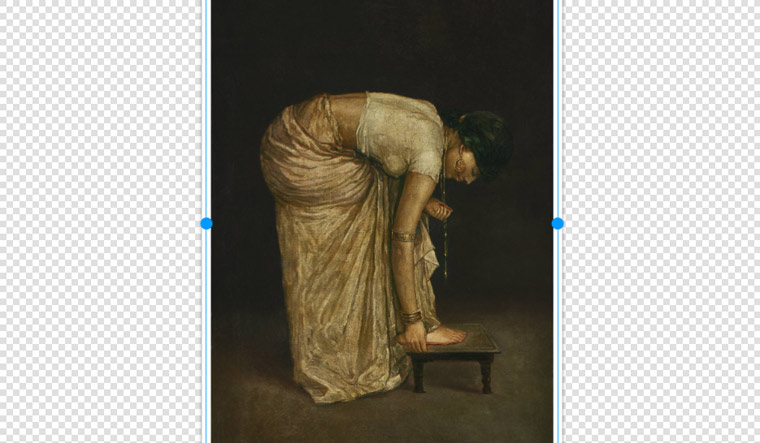 To trace the first popular representation of the "wet sari" in Indian art, one need look no further than Hemendranath Mazumdar.

A hundred years ago, the Bengali artist painted Palli Pran (Soul of the Village) where his female subject is shown emerging from a dip in the village pond. Her back portrait is sensuously swathed in a dripping wet sari, covering her bare flesh in translucent folds from the head which is staring down in thought. This award-winning painting would go on to establish Mazumdar as one of the foremost Indian artists working in the western academic style of painting, specifically known for capturing the desirability of elite Bengali women of his time.

Rather than the backview—recurrent in Mazumdar's body of work—we have a sideways portrait of a slender female figure draped in a gold sari and decked in minimal jewelry. As she bends to tend to her feet propped on a raised platform, her eyes appear to be closed, almost in peaceful slumber. The thin, shimmering sari in antique gold, wrapped in gentle wrinkles, is set against a night-black backdrop, lending the painting its dark, palatial refinement.

Mazumdar had gained a good deal of public recognition in the 1930s and the Indian royalty readily patronised him, including maharajas of Cooch Behar, Dholpur, Bikaner, Jaipur, Jodhpur and Kashmir. In fact, the Maharaja of Patiala engaged him as a state artist for five years. This painting is most definitely inspired from his royal attachments. The suspended gold chain is painted with utmost precision.

For most of his artistic career, Mazumdar fervently advocated a naturalist style of painting. He held out against the more popular Bengal School of Art movement which reacted against colonial aesthetics or a western style of realism and observational rigour. But Majumdar's realistic study of the female form does hold a special place in the long history of painting nudes in India. The book 'Hemen Mazumdar: The Last Romantic', edited by Caterina Corni and Nirmalya Kumar explains how Majumdar's paintings especially resonated with the Bengali middle class in 1920s and 30s.

Art historian Partha Mitter writes in the book about "the vexed question of the wet sari effect" in Majumdar's paintings. "He created a genre of Bengali beauties that captured the imagination of the contemporary Bengali public because of the novelty of their intimacy and their immediacy. They were not impersonal figures learned from art schools but palpable, breathing, real women.....He thus invented a new genre of figure painting in India, suggesting sensuous flesh tones and soft quality of the skin, enhanced by the semi-transparent garment."