A total of 224 films were screened under different sections 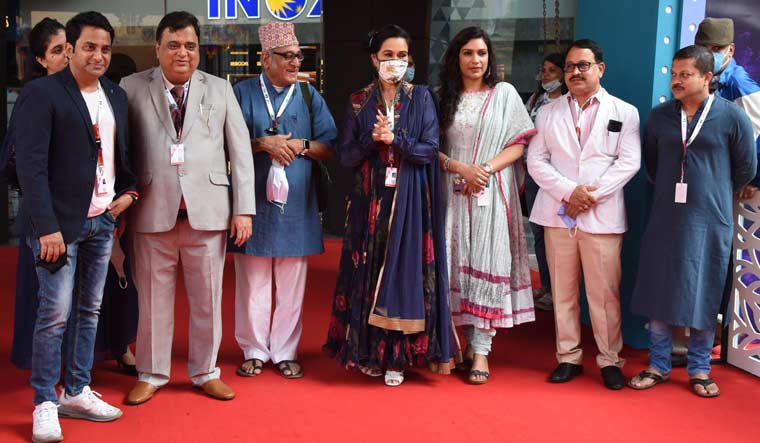 Director Shashank Udapurkar of ‘Prawas’ along with actors Padmini Kolhapure and Mohan Agashe on the Red Carpet, during the 51st International Film Festival of India (IFFI-2021), in Panaji, Goa | PIB/PTI

Danish World War II epic "Into The Darkness" won the top honour of Golden Peacock Award at the closing ceremony of the 51st International Film Festival of India (IFFI), which was pared down considerably due to the coronavirus pandemic.

Director Anders Refn's "Into the Darkness" chronicles the complex, emotional turmoil of the Danish people during the Nazi occupation of the country.

The award consists of a cash prize of Rs 40 lakh, to be shared equally between Refn and producer Lene Borglum. The duo, however, were not present.

Taiwanese actor Tzu-Chuan Liu, 17, was honoured with 'Silver Peacock for Best Actor' for his role of a hearing impaired in the film while Taiwanese filmmaker Chen-Nien Ko won the best director award for her "heart-wrenching exposition of the systemic sexual abuse" happening in a school for children with special needs.

The Silver Peacock for best actor female was awarded to Polish actor Zofia Stafiej, for her role in director Piotr Domalewski's "I Never Cry" at the ceremony held in Panaji.

The film explores the journey of a daughter who has to navigate the maze of bureaucracy in a foreign country to bring back the body of her dead father.

Stafiej, who wasn't present at event as well, would receive a certificate and cash award of Rs 10 lakh.

The film tells the story of a 17-year-old transgender Brazilian girl aspiring for a normal life.

The ICFT UNESCO Gandhi Award given to a film that reflects Mahatma Gandhi's ideals of peace, tolerance and non-violencewas awarded to Ameen Nayfeh's 2020 Arabic film "200 Meters".

The award consists of a certificate and a medal. It is given as part of IFFI's collaboration with the International Council for Film, Television and Audiovisual Communication (ICFT) Paris.

Cesar, who could not be present at the event, said in a video message, that the festival offered the jury varied themes of films to choose from.

"Especially those that make us reflect on individual freedoms, rights of children and all the people of this world, empowerment of women and memories of things that same people have done which we are sure we never want to happen again. Thank you IFFI for selection of films which are rich in content and aesthetic search," he added.

Three Indian films—Assam-set "Bridge" by Kripal Kalita, "A Dog And His Man" by Siddharth Tripathy and Ganesh Vinayakan's "Thaen"—were nominated in the International competition line up, which consisted 15 features from across the globe.

Only "Bridge", however, managed to take home the 'Special Mention' honour.

Aman, 69, lauded the festival for managing to invite cinema talent from across the world even in its slimmed down avatar.

"As we journey towards the post pandemic world, a glimpse of it can be felt today with this excellent gathering of film lovers. I am certain all the films selected are backed with immense hope for a world with better understanding towards multiple issues, cultures, society or an individual unit," she said.

Union Minister and singer Babul Supriyo and veteran actor Biswajit Chatterjee, who was conferred the ''Indian Personality of the Year'' award at IFFI, were also in attendence along with Goa Chief Minister Pramod Sawant and Goa Governor Bhagat Singh Koshyari.

A total of 224 films were screened under different sections at the 51st edition of the festival which was pushed by two months from its original November show.

Apart from the opening and closing ceremony, which was live telecast, few World Panorama films were also streamed online.

Danish filmmaker Thomas Vinterberg's "Another Round" opened the festival, while Japanese historical drama "Wife of a Spy" by Kiyoshi Kurosawa was the closing film.

The nine-day festival was conducted jointly by the Directorate of Film Festivals (under Ministry of Information and Broadcasting) and Goa government.