'High Grounds': How HRTC bus drivers in Spiti live to tell the tale 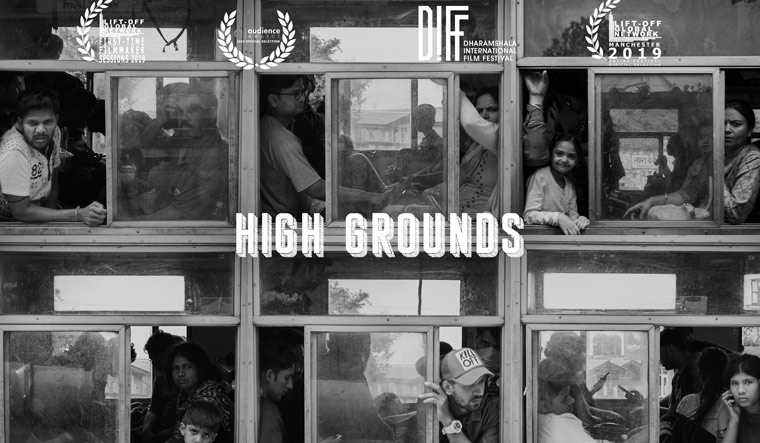 In the short non-fiction documentary High Grounds, a 90-year-old grandmother from Langza village in Spiti Valley advises viewers against losing their cool with bus drivers.

Her village is one of the remotest in India, in the western-most corner of Himachal Pradesh. It took over a decade for the state government to even build a bus route from her village to Kaza, the capital of the Valley. She recalls a story when a group of Tibetan visitors came down to Losar in a bus, near Losar Lake in the Valley. The Dalai Lama was also visiting at the time and the visitors were in a hurry to meet him. The Tibetan party, the grandmother explains, refused to understand the concept of a public bus which would make multiple stops to pick up passengers. They would keep threatening the driver, exhorting him to drive fast. "Remember, a driver's life hangs by a thread on these roads," she warns ominously. The group was a few hundred metres away from the lake—clearly visible from the window—when the driver loses his mind from the constant heckling. He asks the conductor to deboard. After the conductor leaves, the driver drives the bus into the lake. No one survives.

Twenty-two year old Rajiv Malu cannot ascertain if this is a cautionary fable or a true story in his documentary, now screening online at the ninth edition of the Dharamshala International Film Festival. But the wise old granny is not overstating the precariousness of the lives of bus drivers attached to the Himachal Road Transport Corporation. 'High Grounds' treads the treacherous "death roads" of Spiti to focus on how these government employees ply their rickety vehicles in the cold desert mountain valley with little by way of insurance or security.

The 30-minute documentary was shot by Malu for over 20 days in 2018 as part of his second year thesis at the Whistling Woods International in Mumbai. "The idea came the year before in 2017 when I had gone to Spiti for the first time. Because it was monsoon then, the roads were even more dangerous with all the narrow, hairpin bends. We hit a landslide somewhere near Roghi road. But it was our 20-year-old driver, responsible for the tempo with 20 other passengers, who really saved the day," recalls Malu. Intrigued by their deft maneuvering and impeccable knowledge of the roads, Malu came back the next year to know more about their lives.

The documentary goes on to show how the same Roghi road in Kinnaur valley is a blind spot on the way to Kaza, how there have been multiple deaths with busloads of tourists tumbling into gorges, how there is pin-drop silence with people clutching onto their prayer beads every time the bus crosses Roghi road. While most travel videos and documentaries rave about the rugged, unrelenting beauty of Spiti and how their road trip to the region was the most humbling experience amidst all the daunting mountains, few have bothered to spare screen time for HRTC bus drivers who ferry people from one village to another through the most nerve-racking routes. "While both Ladakh and Spiti are cold deserts, Ladakh still has roads and a proper air connectivity. Spiti is just rigid rocks."

Malu reports in his documentary how the restroom and waiting area for drivers at the Kaza bus depot is a small apology of a room with two beds. "This room has one kitchen where they cook their own food. Often, there are seven-eight drivers expected to rest here. It is worse than a sleeper coach in a train." says Malu. If a driver dies in an accident, the deceased's family is best offered cremation money and the option of another HRTC job, says Malu. The drivers, who stay months away from their family, just about make seven to eight thousand a month. When the drivers cross from Kibber to Chicham which has the highest bridge in Asia, they depend solely on villagers in Chicham to host them in their houses on overnight journeys. "How we wanted a government job. And now we are stuck with it," rues a bus conductor, emphasising the thanklessness of his job..

Rohtang Pass, the gateway to Lahaul and Spiti, is now expected to decongest with the opening of Atal Tunnel, an all-season highway tunnel built under the Rohtang Pass, offering a faster, alternative route to the remote valley. Whether it will ease the burden of HRTC drivers is a story for another day.

High Grounds can be viewed on http://www.online.diff.co.in till November 4